Throughout 2011, the BTO and RSPB are pitting their birding skills against one another in the TEAL Cup.  This year list challenge has been a good excuse to get out birding around the Nunnery Lakes Reserve with BTO pride against their arch rivals at stake.

With this in mind and the BTO now trailing by a single species, lunchtime saw me and Nick down the Lakes trying to relocate the Woodlark seen earlier, unfortunately with no success, but a Barnacle Goose on D Lake was suitable compensation and brought the BTO back level. 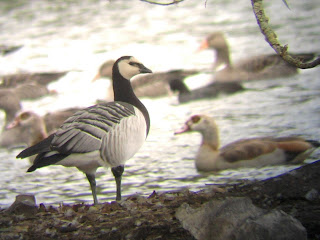 Posted by Neil Calbrade Photography at 21:45 No comments:

It's just another manic Sunday...

As I'm sure I may be reminded, I recently went on record as saying (something along the lines of) "I'm not really in to twitching any more, I'm beginning to see why non birders say what's the point in driving hundreds of miles to see a bird when you can just go to the country where they come from a see loads of them and other stuff".  Just 9 days ago I returned from a two-week trip to British Columbia where amongst the other birds I saw was Sandhill Crane, in fact I saw quite a lot of them.

On my return to the UK, news broke of a Sandhill Crane in Aberdeen.  This did make many people travel right up to the north of Scotland to see this bird but I was unmoved, why should I when I have just been watching them?  Last week the same bird started its journey south, reaching North Yorkshire but then it vanished, leaving many to wonder if it would be seen again....

As I sat processing Grizzly photos just before lunchtime, I glanced at the pager sitting next to me on the sofa......"**MEGA** Suffolk Sandhill Crane just north of Aldeburgh at North Warren".  A few minutes later Richard and Dave accepted a lift to take the gamble it would still be there.  As we arrived at Dave's, news broke that it had flown south over Aldeburgh....but where next and should we take a chance?  We all agreed that Landguard Point, a good few miles south of Aldeburgh would be a good location to head to in the hope it follows the coast, but we weren't confident.  As we headed along the A14 news broke that it had been relocated just the other side of the Alde Estuary at Orford, and the twitch was back on....

Three quarters of an hour later, we arrived in the seaside village of Orford and had just pulled in to the car park at the quay when news broke that it had flown south and had been relocated a few miles south at Boyton.  Thanks to some excellent map reading from Richard (I think Dave was probably praying or writing his eulogy in the back seat) as we rallied around the small country lanes, we arrived in Boyton to be greeted with the news that the bird was still there.  Trying to find a parking space on the very narrow lane next to the field was something of a challenge so with the lane blocked by so many cars, we abandoned the car and watched the bird feeding in a stubble field through the simmering heat haze.  I took a few poor record shots through the heat haze but then packed the camera away and just enjoyed decent 'scope views.

After a while, chaos had ensued in the little village of Boyton as cars were parked in any conceivable space, many locals took exception (and a few heated words were exchanged with birders) whilst others just looked completely bemused and the police were called to clear the lane so that lorries could get through to the farm.  Thankfully after about an hour or two, a microlight flew over and spooked the bird which then flew off (as it turned out, to only a few fields further down the lane) and so many birders left and a sense of calm took over and the donations to the church fund piled up, but it then stayed until at least dusk allowing latecomers to connect with it.
Posted by Neil Calbrade Photography at 21:20 No comments: