Possibly my favourite British bird is the Short-eared Owl.  In the last couple of winters, good numbers of owls have come across from the continent to winter and at a few sites, over a dozen can be seen hunting together.  I have now spent the last two afternoons trying, but ultimately failing, to get some good shots of these birds at two such sites, Worlaby Carrs in North Lincolnshire and Burwell Fen in Cambridgeshire.

Unfortunately, I wasn't alone in this quest and weekend probably isn't the best time to visit these sites as they are very popular with birders and photographers alike, and as a result the birds keep their distance from the massed ranks.  With scores of people stood along the road, it really is no surprise the birds don't come very close, even though there are many stunning images taken, presumably midweek when the number of people is much fewer.  Still managed excellent views of birds at both sites, but photography-wise, I'm going to have to make a better effort to get back in quieter times.
Posted by Neil Calbrade Photography at 21:08 No comments:

After a good night's sleep at the Grant Arms Hotel and the best breakfast you can imagine, I was ready to get out and enjoy the unseasonally glorious weather again. With only the morning to get out and find some of the local specialities before I had to make the long drive back south, I stopped at Loch Garten and spent the next few hours trying the photograph the Crested Tits coming to the feeders.  With so many Coal Tits also coming to the feeders, the Cresties didn't get much of a look in and frustratingly stayed on the branches which were in the shade. 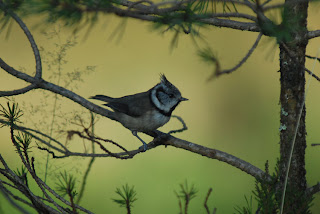 The Coal Tits were a bit more cooperative but the 2 Red Squirrels were more bothered about chasing each other than coming out into the open. 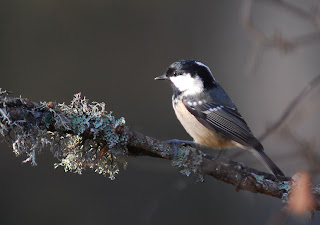 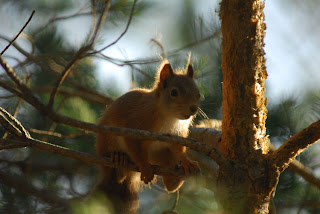 Posted by Neil Calbrade Photography at 19:56 No comments:

After the dull grey of yesterday, today I woke up to glorious subshine and hardly a breath of wind, ideal conditions for photography and a proper bash of Orkney.  Well, that would have been nice had I not been booked on the 9am ferry back to the mainland!  An early start found me sat at Stromness ferry terminal cursing the fantastic conditions as I waited to board the ferry.  A few Black Guillemots showed well alongside the ferry, but only having the 300mm lens to hand, I couldn't get much more than record shots.  The crossing back across the Pentland Firth to the mainland was relaxing with hundreds of Fulmars and Gannets and Kittiwakes too seen, but not much more.

Arrived in Scrabster Harbour an hour and a half later and again, Black Guillemots found the harbour to their liking and this time I was able to get the big lens out and walk around the port to photograph them just below the harbour wall. 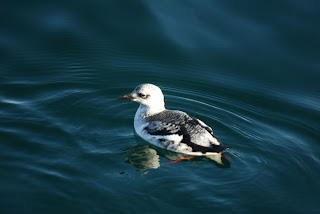 With the rest of the day to amble down to Speyside, I headed for the most northerly point on the British mainland - Dunnet Head.  Stopping for a few minutes to photograph some typically stupid looking Highland Cows with their long fringes, which are in themselves the most northerly mainland herd. 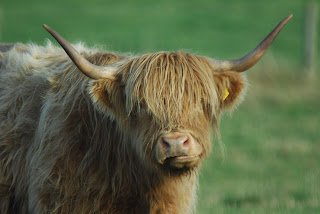 Dunnet Head was very quiet, a far cry from the summer when the huge cliffs are alive with noisy seabirds, with only a flyover Snow Bunting and a Merlin for my efforts.
Posted by Neil Calbrade Photography at 19:28 No comments:

Having completed my WeBS Talk roadshow (taking in Inverness, Thurso and last night, Kirkwall in the last three days), today I was looking forward to getting out and exploring Orkney properly.  Waking up to dull grey windy weather was not what I was hoping for but filled with anticipation, I set out and headed east.  Stopping briefly to check the bays, finding a couple of Slavonian Grebes and following a short search around the southeasterly point of the Orkney Mainland at Point of Ayre with a few Purple Sandpipers and 5 Barnacle Geese I retracd my steps back to Kirkwall and then headed south.

Crossing the causeway to Burray, there are several bays which were sheltered and held quite
a few birds.  The stars of the show were at least 30 Long-tailed Ducks, the males looking stunning in their winter finery and displaying and calling to each other, a magical experience.  The bay also had at leasta  dozen Slavonian Grebes, a Great Northern Diver and a couple of Black Guillemots.

Carrying on south, I reached South Ronaldsay.  I headed for Sandwick, the most southerly point and the ferry port to have a look around and was quite surprised to find a couple of Wheatears, which would have been unusual at this time of year on the south coast of England, let alone Orkney.  Other than a few Blackbirds, Robins and Goldcrests, the area was very quiet, though a ringtail Hen Harrier was a more expected, but nonetheless, nice bird to see.

Having had a quick look at the RSPB Reserve at The Loons yesterday afternoon, I decided to go back there, and having missed my turning, which given the number of roads on Orkney should have been avoidable, I ended up going the long way round.  This misjudgement turned out to be a good thing as a Great Grey Shrike flew across the road in front of me before typically perching on roadside wires, but flew on a bit further before I could even think about getting the camera out.  With my WeBS hat on, it was good to see good numbers of Icelandic Greylag Geese around the island, and The Loons is a regular roost site, and the fence posts according to the notice board should be checked for Short-eared Owls, which proved right with an owl sat watching for voles in the grass.  As dusk fell, a quick look at Marwick Bay produced a juvenile Iceland Gull which was a nice end to the day, just a pity the light never improved to be able to get any photos.
Posted by Neil Calbrade Photography at 19:29 No comments: