Sitting in wet long grass by a river for a couple of hours may not be most people's idea of how to spend a Saturday morning, but once the fog had lifted, I was out trying to photograph Water Rails on the BTO's Nunnery lakes reserve, having failed last week.  Thankfully, persistence paid off, but typically, the bird I was after was shy and skulking but after a while it did show well feeding on a mat of vegetation. 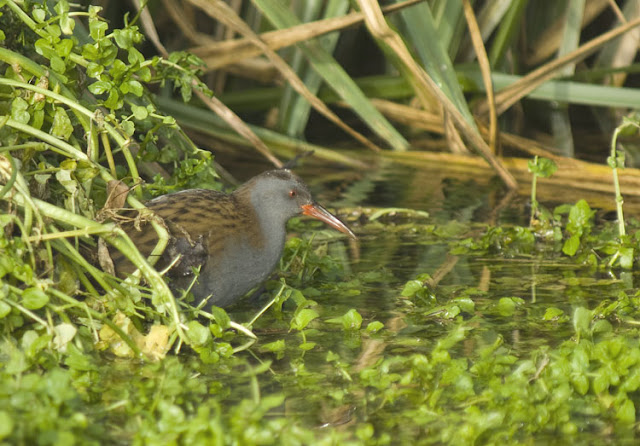 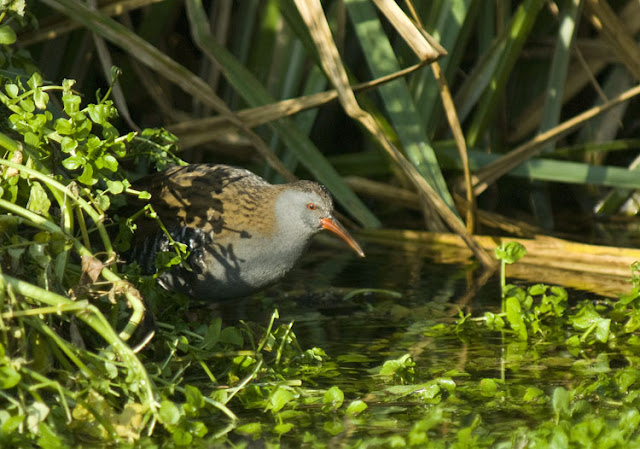 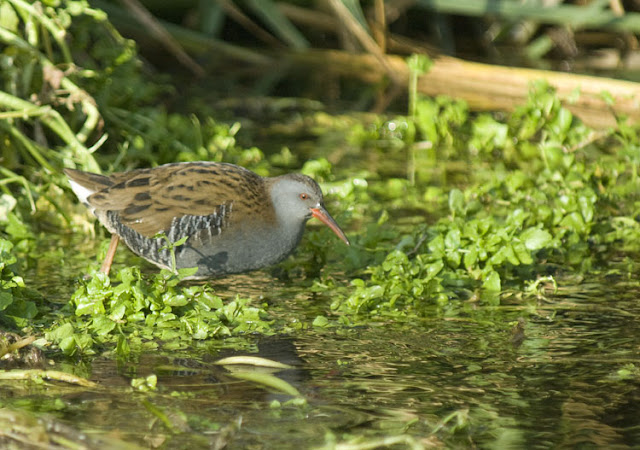 The rest of the reserve was mostly quiet, but as I walked back﻿ alongside E Lake, I glanced up at a few circling gulls and was more than a bit surprised to see one had all white wings - an adult Mediterranean Gull!!  The next few seconds I was all a fluster as I frantically tried to get a record shot of this extremely rare visitor to the reserve but thankfully I managed to get something reasonable.  I contacted the local Lakes birders of my find but the bird drifted off and I lost track of it and despite a thorough search, couldn't relocate it. 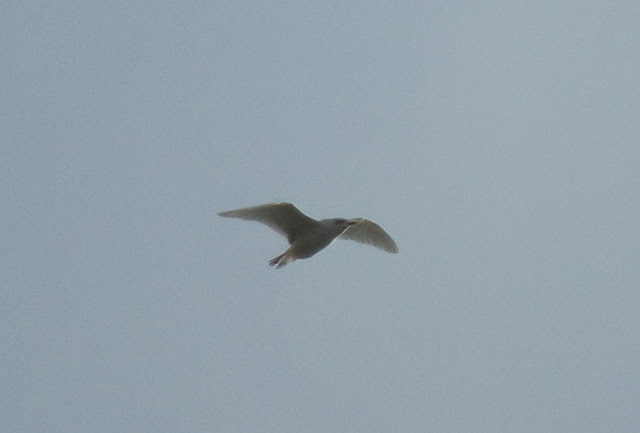 Posted by Neil Calbrade Photography at 19:44 No comments:

Beats a morning in the office!

Woke up to glorious sunshine and a sharp frost, so instead of heading in to the office, I picked up the camera and headed down the Nunnery Lakes reserve instead.  Recently, a couple of Water Rails had been showing well along the river so over the weekend I had tried baiting the best areas, and in the process getting stunning views of these normally skulking birds.  Typically, today when the light was superb and I had my camera with me I didn't even see a rail, let alone photograph one!!  Oh well, something to keep trying for...

Even without the bonus of photographing the rails, it was still a glorious morning to be out with the camera slung over the shoulder.  There were a few good birds around, the drake Goldeneye was on E lake and the female Scaup was still on D Lake along with a Shelduck and adult Herring Gull, all local scarcities, and a few of the commoner birds like Coot and Greylag Geese did show well for a few photos. 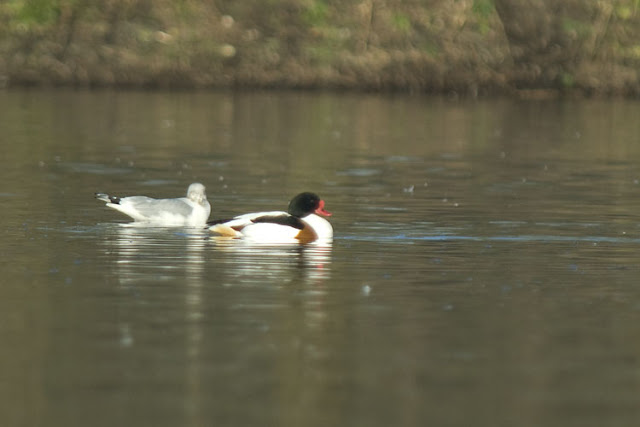 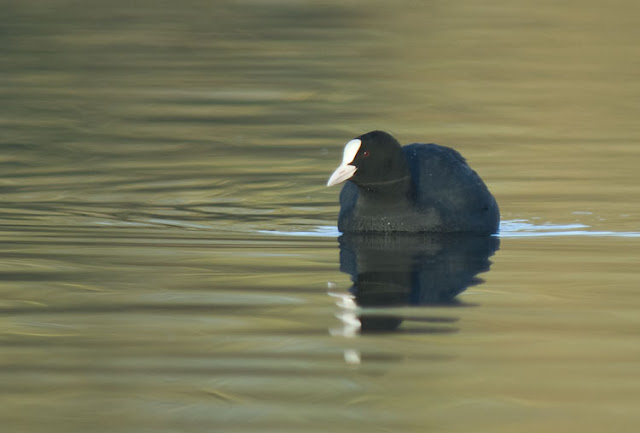 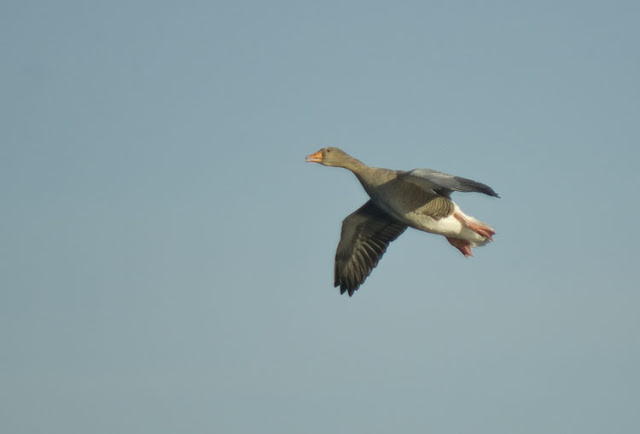 Greylag coming in to land
Happy with my morning wander round, I was sat at my desk a couple of hours later when we received news that a Short-eared Owl had been found down the Lakes.  Chairs were left spinning as me, Nick and Dawn rushed down to join John who had seen the bird.  After a short search, the owl flew up and showed well being mobbed before drifting off, a most unexpected but very welcome bonus and a Lakes tick for all present. 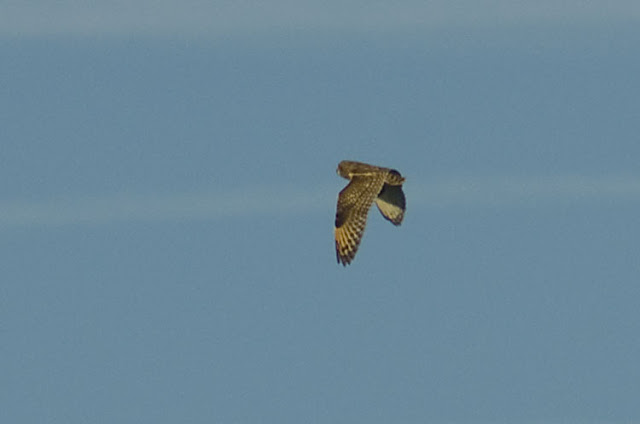 Posted by Neil Calbrade Photography at 20:05 No comments:

Hoping to carry on from yesterday's success, we were out early again but failed to find Golden Pheasant or Hawfinch around the Brecks.  In fact the day didn't really get going until we left the Brecks and headed north to the coast and the RSPB's Titchwell reserve.  The main attraction here was an Arctic Redpoll along with a few Lesser Redpoll and a Mealy Redpoll that showed well on the path by the visitor centre, though the light wasn't the best from the position we were in away from the rest of the crowd. 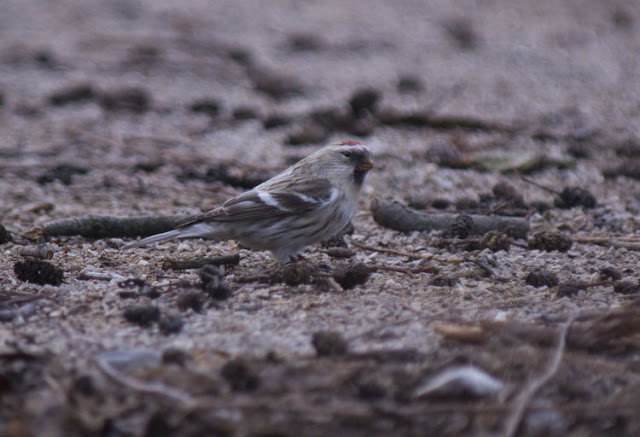 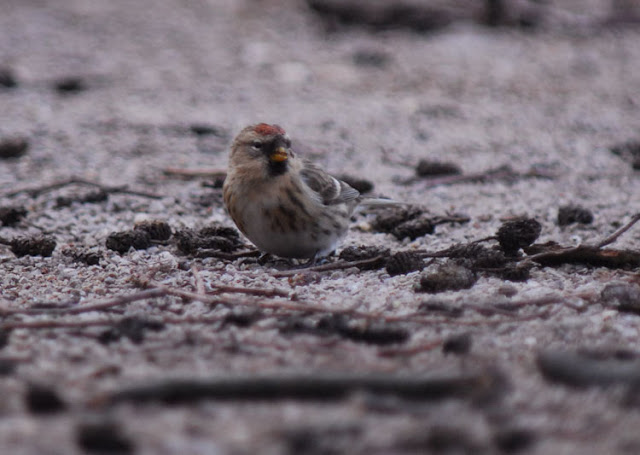 and a Mealy for comparison
A bit further down the path a Chinese Water Deer showed well on Thornham Marsh, looking a bit worse for wear with a torn ear and bald patch on its back, presumably from a scurmish. 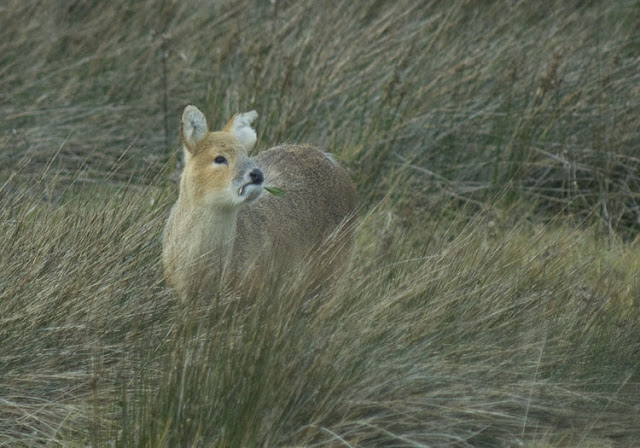 The rest of the reserve was fairly quiet, other than a Scaup on one of the pools, several Ruff and best of all an adult Yellow-legged Gull found amongst a mass of other gulls on the freshmarsh along with a very photogenic Black-tailed Godwit. 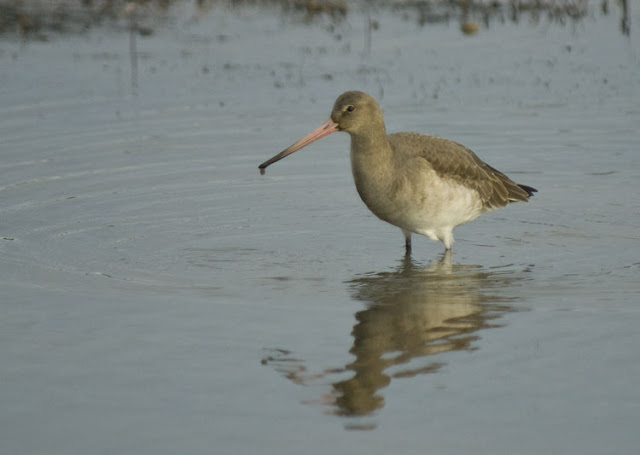 With the afternoon fast racing away from us, we headed east to Holkham, stopping briefly to watch 3 Barn Owls by the road at Burnham Overy Staithe. 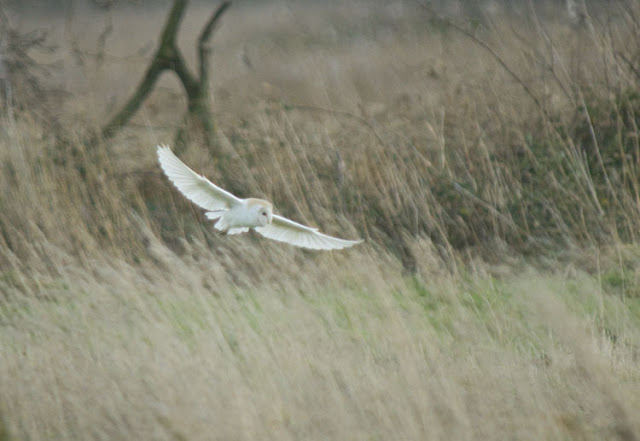 One of the best finales of any days birding on the North Norfolk Coast is the roost of tens of thousands of Pink-footed Geese, and although numbers have been lower in recent years, it really is quite a spectacle, especially when they take to the air. 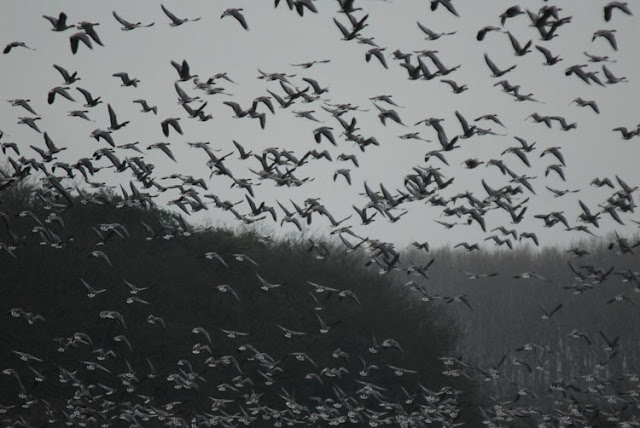 Posted by Neil Calbrade Photography at 22:35 No comments:

Wild Goose chase on the Broads

A returning Lesser White-fronted Goose in the Broads was enough of an excuse for a day out birding.  By the time we had got to Buckenham Marshes, the sun was out but the wind which had died down yesterday had raised its head again.  A group of birders were already 'scoping the Bean and White-fronted Goose flock when we arrived and then after a few minutes searching, the Lesser White-front eventually showed itself, and the pagers weren't lying when they said it was distant!  The distance coupled with the stiff breeze and the bright sun meant it wasn't the most satisfying of ticks, but it was still distinctive enough to pick out.  Knowing the goose was going to be distant, there really seemed no point taking the camera with me, but many of the Wigeon here show superbly well by the track that I ended up regretting my decision.
Next stop was a short drive to Ranworth Broad where a female Ring-necked Duck showed well amongst a few Pochards but as always seems to be the way with ducks, it spent most of its time fast asleep. 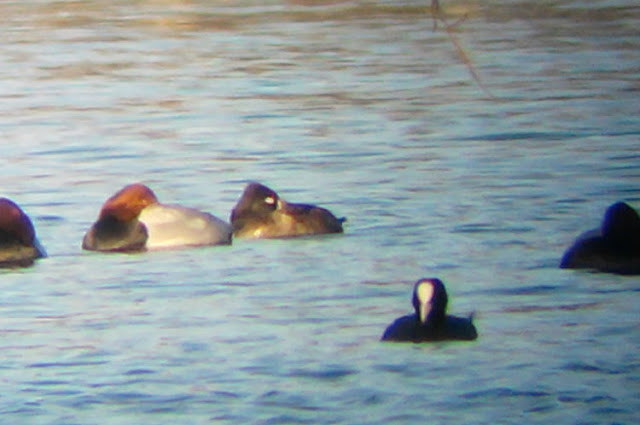 As is customary on days birding in the broads, the best place to end the day is at the harrier and crane roost at Stubb Mill.  Normally we just get there for the last hour, but today decided spend a little longer there, arriving at the viewpoint at 1.30pm.  Almost immediately, 3 Cranes dropped in and then after a short wait, 2 flew across, giving probably the best views we've ever had here.  A while later, 2 different Cranes were located on the ground, albeit distantly from the viewpoint, but again showing well, and even tempting me into a digiscoped record shot. 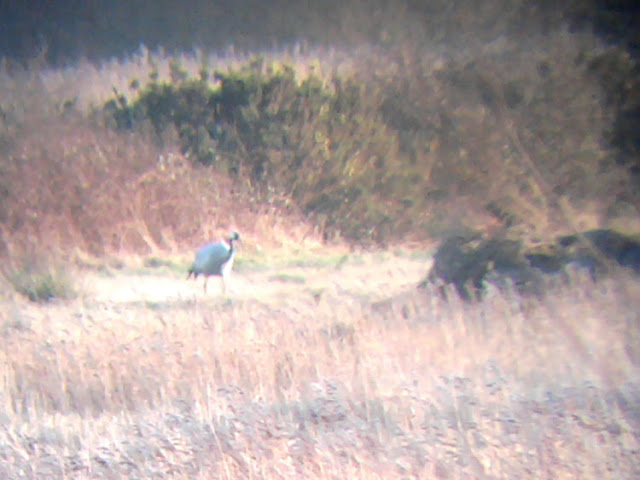 The Cranes are the highlight for many, but possibly more impressive are the numbers of Marsh Harriers which gather here, and today there were well in excess of 30 birds in the air at any one time along with a single ringtail Hen Harrier.  By the time dusk, and with the stiff breeze, the temperature, fell, in addition to the harrier fest, we had seen at least 6 Cranes, 17 Bewick's Swans, Kingfisher and a Peregrine which caused chaos as it flew through, so all in all, a good day!
Posted by Neil Calbrade Photography at 21:12 No comments:

It appears that this year we are going straight from autumn into Spring, not bothering with winter...well that's what the local birds seem to think.  Robins and Blackbirds are already practising their dawn chorus songs and down the Nunnery Lakes this lunchtime, Dunnocks, Wrens, Goldcrests were also in full voice and displaying to one another.  With the gales finally dropping and unseasonally mild and sunny weather today, the lakes were quite busy with 5 smart drake Goosanders, a remarkable (or if you are a fisherman, worrying) flock of 28 Cormorants that came up off D Lake, which then proceeded to circle overhead like something out of Lord of the Rings and much more unusual down the lakes, an adult Greater Black-backed Gull.
Posted by Neil Calbrade Photography at 17:16 No comments:

With the BTO Vs RSPB Teal Cup now finished, birding around the Nunnery Lakes reserve this year should be a little more relaxed without the competitive pressure.  My first visit for a couple of weeks this morning really didn't set the pulse racing, though the drake Goldeneye and a couple of Goosander remained on the lakes from last year and a cracking Water Rail and a Little Grebe showed well on the river.
Posted by Neil Calbrade Photography at 20:20 No comments:

Woke up to find the weather forecast of bright sunshine hadn't come true with dull, grey overcast conditions, but a Lesser Redpoll on the nyger feeder in the garden brightened things up whilst I had my breakfast.
Needing to visit Minsmere, I took a detour to go via Upper Hollesley Common where the Great Grey Shrike showed briefly and rather distantly and a couple of Crossbills flew overhead, certainly not worth getting the camera out for.  After another short detour for a quick look at North Warren produced a few White-fronted Geese, but no Beans with them, I finally got to Minsmere.
By now, the grey had turned even duller, so I didn't even bother lugging the camera round and just went for a stroll around the reserve.  The Scrape had its usual Teal and Wigeon masses, with a couple of Whooper Swans and a single Avocet about the most interesting birds present, whilst the neighbouring reedbed held singing Cetti's Warblers and pinging Bearded Tits.  The bay from Walberswick to Aldebrough holds one of the highest concentrations of Red-throated Divers in the UK, and watching the sea for a few minutes you can see why with many divers on the sea with countless more streaming past and also a lot of Great Crested Grebes on the sea too.  Nearby, the Levels which run south from Minsmere reserve to Sizewell had a good assortment of geese, but again no Bean Geese could be found amongst the White-fronts, Barnacles and single Brent present.  One new feature of the reseve is the recently opened Island Mere Hide, which is a far cry from the previous hide from where I used to carry out 6 hour Bittern watches from in my time working here.  Thankfully this new hide isn't an eyesore like the new hide monstrosity at Titchwell, though quite why there are swivel chairs in a hide instead of the usual benches is anybodies guess.  Unfortunately only a few Marsh Harriers and a murmuration of Starlings provided any interest late afternoon, and as the rain set in for the evening, that signalled the end of a quite enjoyable day on the Suffolk coast.
Posted by Neil Calbrade Photography at 19:46 No comments: