Chilling after watching United demolish QPR, I glanced out of the window and noticed some feathers drift across the garden.  It was soon apparent why..... 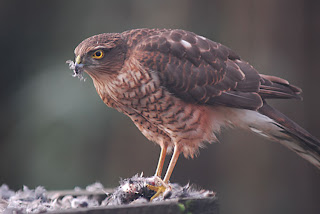 This young Sparrowhawk was sat on my bird table tucking into a Chaffinch, and it then stayed there for the next twenty minutes, 10 foot away from the kitchen window, just a pity the light wasn't a little better.
Posted by Neil Calbrade Photography at 15:11 No comments:

Email ThisBlogThis!Share to TwitterShare to FacebookShare to Pinterest
Labels: Sparrowhawk

Following yesterday's success with one American wader, today saw us down on the Blackwater Estuary looking for another, this time a Spotted Sandpiper.  Despite the vague pager directions, we finally made our way along the seawall, passing large flocks of Avocets, Brent Geese, Lapwing and Golden Plover to the gravel pits where it had last been seen.  Unfortunately, a dog walker had flushed it a few minutes before we arrived and only after a long cold wait did the bird show, very distantly at first on an island but eventually flew closer and fed along the near shoreline.  As I thought the bird was going to be distant I didn't bother taking the camera but as it was so close, I did manage a couple of acceptable digiscoped record shots with my phone! 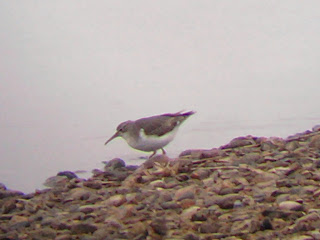 Posted by Neil Calbrade Photography at 18:45 No comments:

Following the discovery of a Western Sandpiper at Cley, Mark came down for the weekend to twitch it.  The identification of this bird has been the subject of quite a bit of debate, having originally been indentified as a Semi-palmated Sandpiper, only on Wednesday once better views and photos in the Cley Birds website did the true identifcation come out, well, true for now.....

We got to the reserve mid morning and were amazed to find there weren't actually that many birders in the hide, I was expecting queues out of the door and packed hides, but it was surprisingly relaxed and the bird showed well, though not particularly close.  I have to confess, I can see why it took so long for the identification to be sorted, from the views we had, I would have struggled to not call it as a Semi-palmated, especially having seen a lot of Semi-p's and Westerns in the States in the last couple of years. In the field the bill didn't appear as strikingly long as the photos show and the range we were watching it at, the tell tale scapular markings couldn't be made out which is what a lot of the identifaction of this bird is being based on, but still a smart little bird.  Also on the reserve was a fellow American, a Green-winged Teal on the adjacent marsh and also a Water Pipit.

After a quick cup of tea, we headed west towards Titchwell.  As we drove through Burnham Overy, we came round a corner to be faced with a group of birders stood by the road, keenly watching something.  Thankfully, there was a convenient pull in, so we stopped, got out and scanned in the direction the others were looking and immediately saw a Rough-legged Buzzard circling by the road, which although distant did show well with the white tail and dark terminal band particularly striking.

Titchwell was typically superb, even though we couldn't find the Yellow-browed Warbler, but the supporting cast of a couple of Spoonbills, Spotted Redshanks, Water Rail and an incredible number of Little Egrets and then a couple of Barn Owls on the drive home certainly made a good end to the day.
Posted by Neil Calbrade Photography at 20:44 No comments: