A blessing in disguise??

September in southern Spain is most famous for one thing....raptor migration!  Being the narrowest point across the Straits of Gibraltar, the area around Tarifa is a funnel for thousands of southbound raptors and other migrants, and naturally their watchers.  Wind direction is crucial for viewing the spectacle, and as we headed along the main road towards Tarifa, it was soon obvious that we had picked a good day, with scores of Booted Eagles and other raptors (I would have looked more closely had Toni not kept complaining about something to do with keeping my eyes on the road).  Along the road there are a couple of watchpoints around old deserted buildings which make excellent hilltop vantagepoints from which to view the spectacle.  Scanning around, dozens of Booted and Short-toed Eagles were visible along with fewer Honey Buzzards, Black Kites, Lesser Kestrels and even Sparrowhawks along with Black Storks and a swirling mass of several hundred distant White Storks, though only occasional birds ever came close enough to make photography really worthwhile. 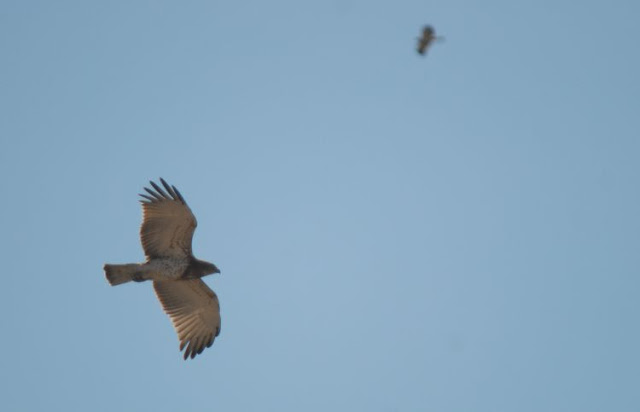 After a couple of hours, the number of birds had decreased so we moved on, stopping for a few minutes at another viewpoint with a cafe.  Returning to the car, we soon noticed a smashed window and the realisation that one of the cameras (thankfully not the one with my big lens on!!) and Toni's purse had been stolen from the car.  We can only have been away from the car for a matter of minutes and even then not that far away, but the local thieves obviously know birders have expensive optics and are constantly on the lookout.  A few frantic phonecalls later and all her credit cards had been stopped and only a small amount of cash was in her purse at the time so the damage was minimal but a lesson definitely learned!

Even before the theft, I had been toying with the idea of upgrading my camera when we visited Gibraltar and a dash just in time as the shops were closing saw us soon kitted out with a new D300s and 70-300mm VR lens and we spent the rest of the evening up on the rock photographing the Barbary Macaques which live there and harrass the tourists for food, but are endearing nevertheless. 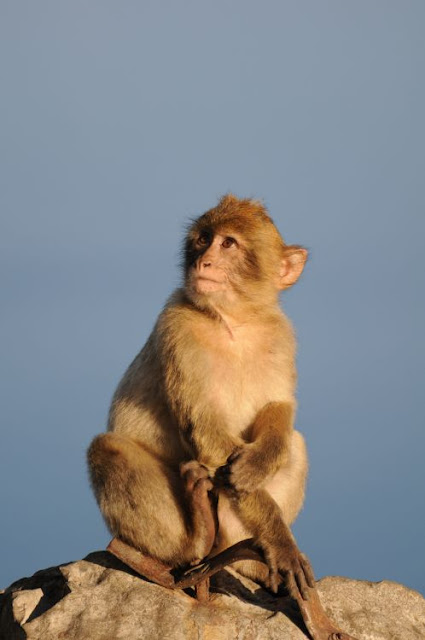 Posted by Neil Calbrade Photography at 22:20 No comments:

Having spent the night in the slightly surreal town of El Rocio, complete with its sandy streets and places to hitch your horse outside every house, we spent the morning back at Donana with much the same assortment of waders on the largely dried out lagoons as yesterday and in the car park, the local Azure-winged Magpies were certainly hungry.... 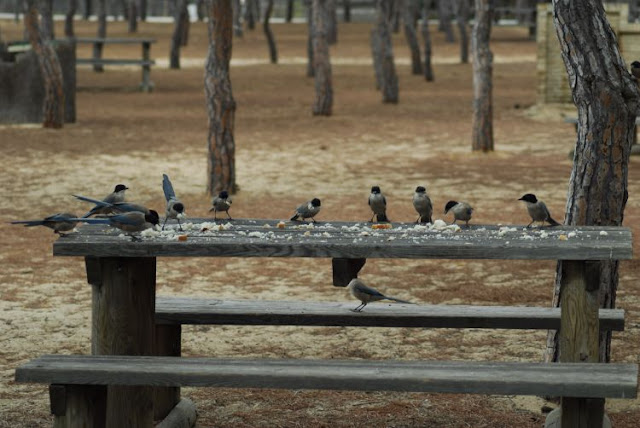 Heading eastwards from Donana towards Algeciras, we stopped off briefly at the Laguna de Medina, which thankfully was still full of water and better still held at least four Purple Gallinules which I had hoped to have seen at Donana.  Unfortunately though, the lagoon is vast and without a 'scope, even the Gallinules would have been next to impossible to pick out despite dwarfing the neighbouring Moorhens and certainly no chance of any photos.  Also a dozen Spoonbills, a handful of Black-winged Stilts, and both Montagu's and Marsh Harriers on show here.
Posted by Neil Calbrade Photography at 20:42 No comments:

A final dawn search for Iberian Lynx once again drew a blank and the realisation that we really should have been here in winter rather than the heat of the summer to look for them, oh well, a good reason to come back I suppose!!

In an effort to salvage something from the trip before we head towards the coast, we headed to the famous Coto Donana wetlands and the anticpated hoardes of waterbirds.  Arriving at the quite bizarre town of El Rocio, it soon became apparent that the lack of any rain since May had all but depleted the water of the area and the big areas of marshland were nothing but dry fields.  Much of the Coto Donana is only accessbile by specially organised tours but there are some areas round the visitor centre with hides that can freely be visited.  Here too, the large lake had been reduced to a few pools, which did hold a few Green Sandpipers and Little Ringed Plovers but not a lot else in the afternoon heat.  Despite Azure-winged Magpies being everywhere around Andujar, they weren't that easy to get close to, but around the car park at Donana, it's a very different story, sit down at the picnic tables and you soon get mobbed, and they really are very attractive birds. 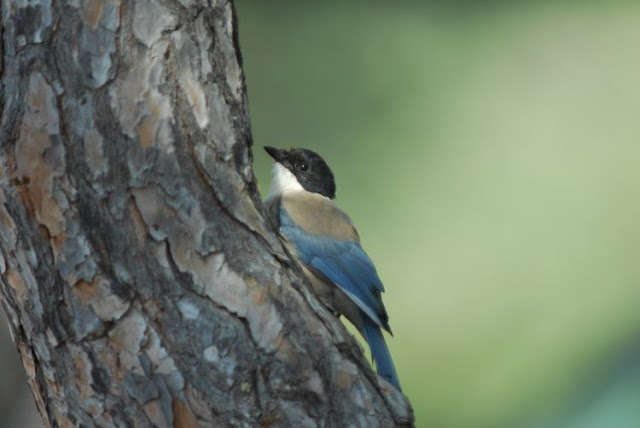 Posted by Neil Calbrade Photography at 07:53 No comments:

Not a cat in hell's chance

Another frustrating day sat staring at hillsides in the hope of an Iberian Lynx wandering into view, but despite dawn and dusk vigils at the two recommended spots, other than a handful of remarkably confiding Red Deer, not a lot was moving.  Birdlife wasn't much more obvious either, 3 Black Vultures circling distantly, a Rock Bunting and the ubiquitous Azure-winged Magpies were about it. 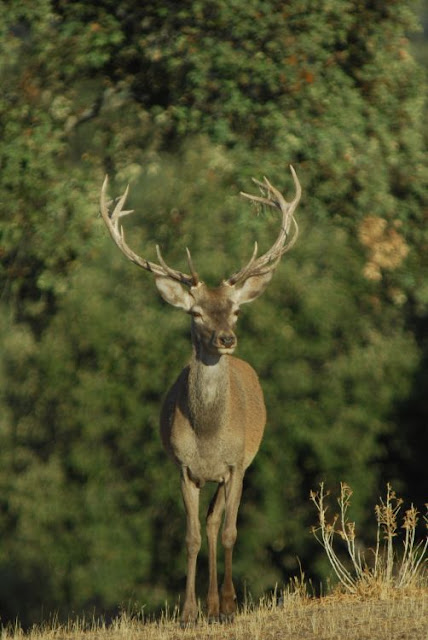 Posted by Neil Calbrade Photography at 22:44 No comments:

Needle in a haystack

Well, not so much needle as slightly different coloured piece of hay in a haystack, having been out before light, we made our way to one of the watchpoints, and as the light improved, so the enormity of our task became clear.  The terrain is vast, and with more lynx-shaped boulders and bushes than you can shake a stick at and trying to find an elusive cat in this really is going to take a massive dose of luck. 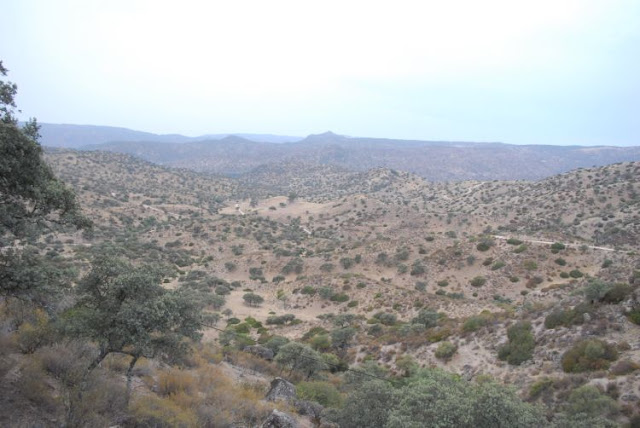 After a couple of hours scanning and nothing but a few bellowing deer and angry Magpies, we conceded defeat and had a drive around the rest of the Sierra de Andujar.  The weather in the morning was very cloudy which at least kept the temperatures down but also made for very flat uninspiring light so other than to photograph a confiding Red-rumped Swallow sat on a roadside wire, the camera remained pretty much unused. 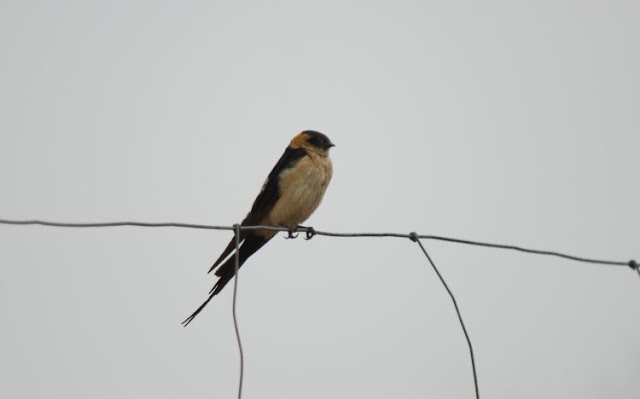 Wildlife was much in evident throughout the day though, with confiding Red Deer abundant throughout and 3 Mouflon briefly.  A drive down a typically rough track did yield a superb adult Spanish Imperial Eagle, ubiquitous Azure-winged Magpies and many Hoopoes but none very photogenic.  In the evening, we drove to another part of the valley to a bridge near a dam where the Lynx apparently cross the river, but despite staying there all evening until dark, a Black Vulture and some ridicuously confiding Long-tailed Tits were about the highlights.  Lynx 1 Wildlife Photographers 0.
Posted by Neil Calbrade Photography at 22:00 No comments:

Having made our way to Gatwick late last night, had a very disturbed sleep in a Travelodge complete with its own train track running about 100 yards away all night, we finally boarded the Easyjet flight to Malaga.  With a sense of disbelief, we weren't even delayed getting on the plane, but once everybody was on board and awaiting final checks, one of the passengers suddenly decided they didn't want to fly after all thus meaning we were sat on the runway for an hour whilst the remarkably patient crew sorted the situation out.  Once that was all sorted we were off and a few hours later touched down in Malaga.  The drive north to Andujar was fairly uninteresting and we arrived at the Villa Matilde just after 10pm to be greeted with the news that our quarry, the Iberian Lynx, hadn't been seen much recently, it's been too hot for them.  Hmmm, not the news we were hoping for, but undaunted we go to bed hopeful of success in the morning...
Posted by Neil Calbrade Photography at 22:30 No comments: