Arriving in Rotterdam on the Hull ferry on Monday morning, we drove across the Netherlands and most of Germany, stopping for a night just outside Berlin and then across Poland to just north of Warsaw for another night before arriving early afternoon on Wednesday in Białowieża, a mere 850 miles. Unfortunately the glorious weather that we had driven through hadn't made it this far and we arrived to find it constantly raining, which not only made our enthusiasm for getting out and walking far not very high, but also made the non-tarmacked roads quite muddy and slippery. A bigger problem was with the recent logging operations and subsequent Greenpeace protests which have made the news, the road between Białowieża and Narweka on the north side was impassable by car due to the heavy sand surface put down for the lorries and many of the trails we had hoped to walk along were now closed. We had a walk around the Palace Gardens, not seeing much except 2 squabbling male Great Spotted Woodpeckers and a handful of Nuthatches and Treecreepers, and got pulled over by the border guards (even though we were nowhere near the border or on a road that crossed it!) who probably had never seen a car with English plates on before, but satisfied, they let us go on our way.

Thursday morning dawned with a damp, grey, drizzly air as we we out as it was getting light, scouring the meadows in the hope of seeing a Bison. No sooner had we driven through the village of Teremiski, we saw a car with hazard lights and a group of people watching a male Bison in a field by the road. Quickly grabbing cameras, we crept down the side of the meadow, tucked in among the bushes so as not to disturb it, only to see one of the group march straight out camera in hand, across the meadow towards the Bison, which, unsurprisingly wandered off across the meadow into some trees in search of peace and quiet, but not before we managed to get some quick shots through the murk. 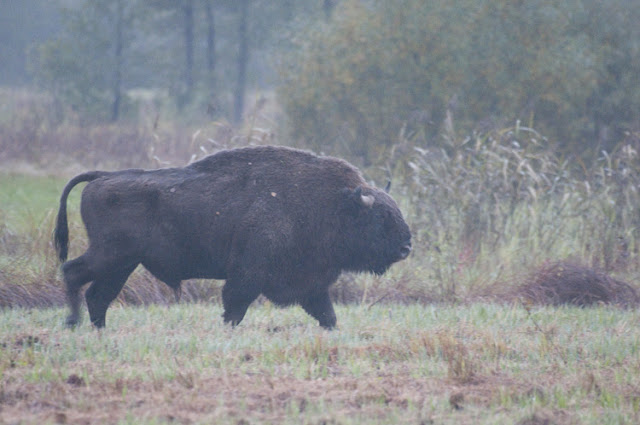 A quick look at Gora Batorego did yield a few Crested Tits and a photogenic Middle Spotted Woodpecker. 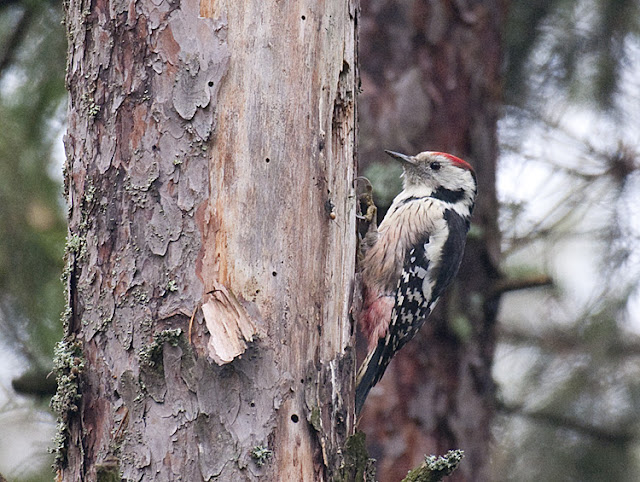 The rest of the day was spent around Siemianowka Reservoir where Red-necked Grebe, a juvenile White-tailed Eagle, 3 Marsh Harriers and a couple of Whooper Swans were visible from the watch tower, along with, more surprisingly, a Fox and along the trail by the reservoir, a Grass Snake, taking advantage of a brief period of sunshine.  A dusk stakeout at Babia Góra before the rain returned failed to produce any more Bison, just a small group of Roe Deer, a Great Grey Shrike, a male Stonechat and a Merlin.

Friday we were again up early and revisited Teremiski Meadows, and thankfully the Bison was again there, though today on the edge of a small copse.  As we were about to edge closer, possibly the same group as yesterday appeared and again marched toward the Bison.  We gave up and drove off and returned twenty minutes later as the group were leaving, and thankfully the Bison was still there and with only 2 of us there, he was a lot more accommodating to an approach than previously as we got within 15m of him as he fed unperturbed, occasionally snorting if you ventured a step too close. 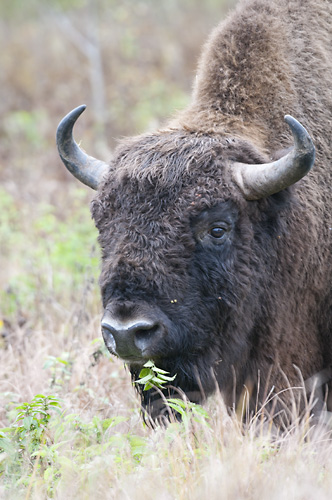 This morning, we had a final walk around Zebra Zubra and Budy Bridge areas, but failed to find any woodpeckers other than Great Spots and a calling Black, though autumn is not necessarily the best time of year to be looking for such things, and we headed north to Augustow Forest and Biebrza Marshes for a further few days.

All in all, Białowieża Forest was a bit of a let down, though the time of year and weather didn't help, but with such limited access to the main tracks through the forest, many of the sites in the excellent guide by Wild Poland were no longer accessible and may not be come next spring when many birders will visit the area.
Posted by Neil Calbrade Photography at 20:50 No comments: