While I was enjoying my time in Canada, looking at Twitter and Facebook, news of a Siberian Accentor on Shetland seemed to be getting a lot of folk back home in a bit of spin, being the long awaited and anticipated first record for the UK.  While exciting for the diehard twitchers, it was not a bird I would think of flying up to Shetland for; a Hawk Owl on the other hand.....

A few days later as I was back home, snoozing on the sofa as I recovered from the jetlag, I got a message from Sarah (who annoyingly for her was on a train down to Cornwall at the time) telling me that another Siberian Accentor had been found at Easington near Spurn Point in Yorkshire - much more twitchable for the masses.  Next day, estimates between 1,000-2,000 birders descended on Easington with queues round the block with the bird still present and showing to all comers but I decided rather riskily to wait until the weekend to go.

Saturday morning dawned and thankfully with the cat thrown out all night I got a good night's sleep to get over the remaining jetlag and with news that the accentor was still present, I set off, arriving shortly after 1.30pm.  Annoyingly, about 10 minutes before I got there, the bird had flown from the garden it had been frequenting and into the adjacent gas compound where it was much harder to see.  Thankfully with only 100 or so twitchers there and ample viewing space, the bird showed well on occasions but viewing and photography in particular were difficult being through wire fence. 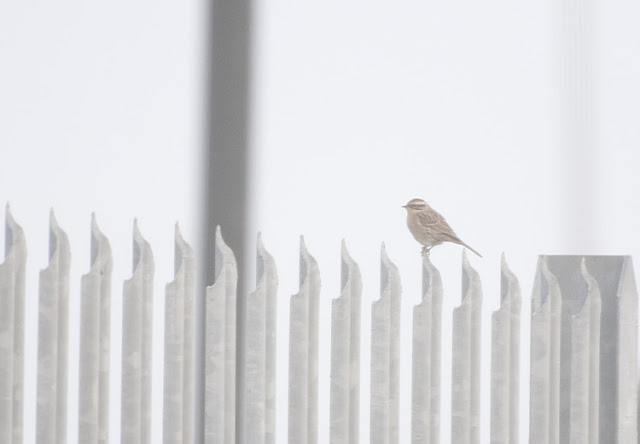 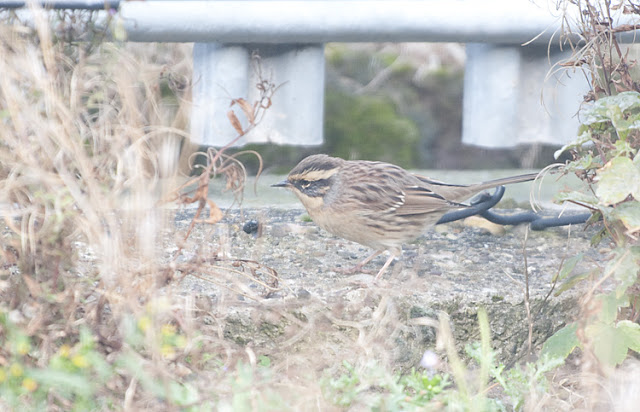 The conditions that had brought the accentor (and even more amazingly, at least 4 others to date) to the country had also brought a good selection of scarce migrants, with Spurn seemingly getting the majority.  A a couple of hours spent walking around the triangle at nearby Kilnsea was excellent, with Robins and thrushes everywhere and Pallas's and Yellow-browed Warblers showing briefly between the churchyard and pub car park and better still, a very showy Dusky Warbler that gave amazing close views along the canal. 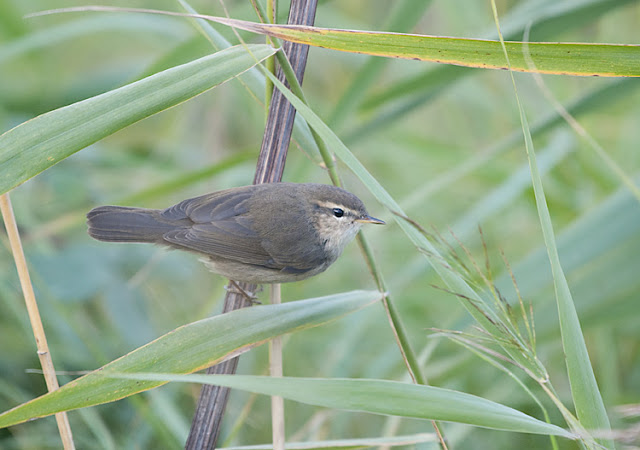 With half an hour of decent light left, I decided to go back to have another look at the accentor which had now moved back to its favoured garden and with only half a dozen other birders there.  Here the accentor showed much better, at first flitting around behind a large yellow skip before eventually feeding with a few Dunnocks 5m away, though the light was fading fast but with the ISO cranked up, photos were still possible, an incredible way to spend the end of the day. 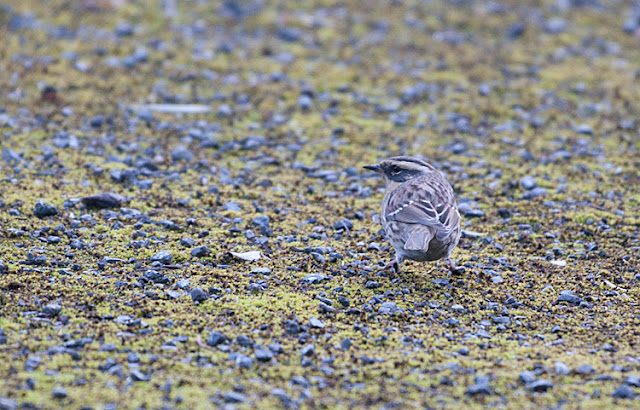 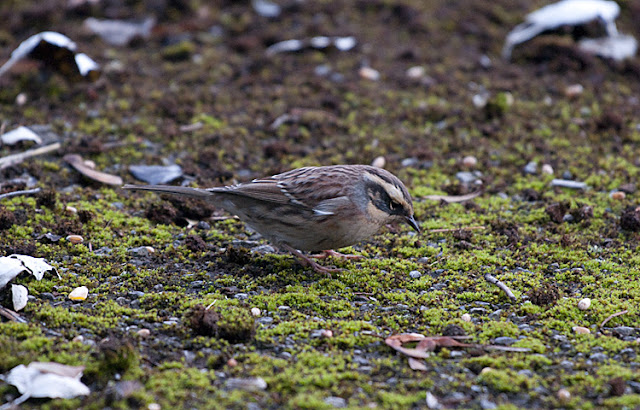 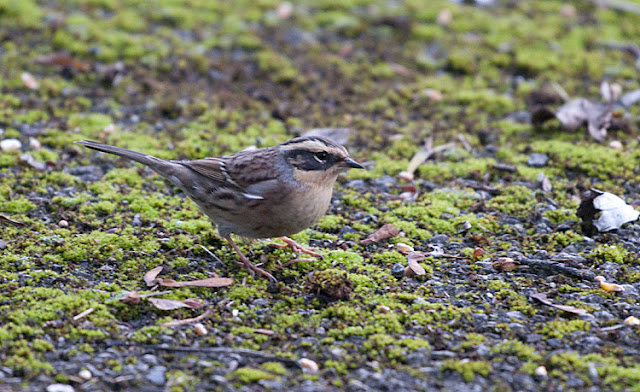 Posted by Neil Calbrade Photography at 19:34 No comments:

The aim of this trip to Canada was to photograph Grizzly Bears, and if we were lucky, Wolves, though we knew the latter would require a huge slice of luck to see, let alone photograph. Having spent a few days in the Bella Coola valley photographing Grizzly and Black Bears, we headed across to the Rockies. Here we started in the south at Banff National Park for three days, visiting likely spots where the three resident packs were known to favour, with no success. Moving north to Jasper National Park for another three days, we again searched for potential sites where wolves may be found but with time running out and with no useful information locally or from the web, our hopes of finding wolves were fading fast and we pretty much resigned ourselves to failure.

On our last evening, we revisited a spot where we had seen Coyote, Elk and Bighorn Sheep a couple of days earlier to try for photographs of these species in the freshly fallen snow.  As we arrived in the area, we noticed the few sheep that were present were halfway up a hillside and not looking particularly photogenic and so pressed on to look for the Elk and Coyotes. Not more than a few seconds down the road, Toni suddenly shouted "Coyote!" as we approached the spot where we had seen a couple of coyotes previously. Looking where she was pointing further down the road, I saw four dark figures running up a hillside away from the road and quickly correcting her said, "They're wolves!!" and quickly slammed the brakes on. Toni managed to compose herself to grab the camera and take some record shots through the windscreen as the four black wolves disappeared into the trees, and lost to view. 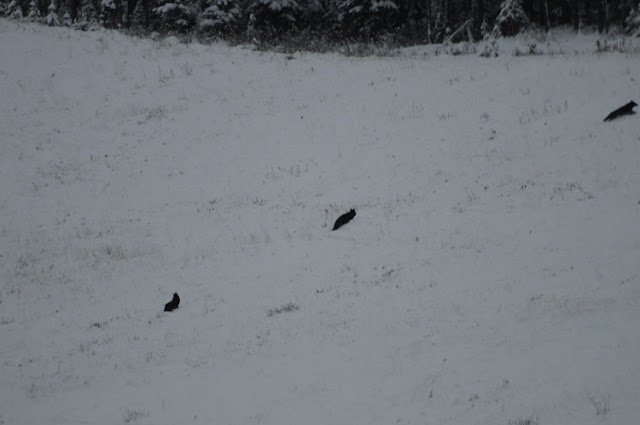 We drove down the road to where they had run up the field, their footprints fresh in the deep snow and parked for a few moments in the hope they may reappear, but after a few minutes it was clear they had carried on into the trees. We drove back up the road to see if we could get a better angle on potential areas where they could reemerge out of the back of the wood but nothing presented itself so spun the car round and headed back down the road. We had hardly passed the spot where we had just been parked when I noticed a path of footprints in the snow across a hillside on the opposite side of the road and said "something obviously uses that path", and almost immediately saw a black wolf running along the hillside through some sparse trees alongside the car and along that very same path. Slamming the brakes on again, we both grabbed our cameras and rattled a load of shots off then raced to get ahead of it, hoping it would reappear on the clear area below the tree line and right on cue it appeared not 40m from the car, running through the snow, stopping briefly to give a locator howl to try to find the rest of its pack, before carrying on along the hillside and disappearing into the tree line. 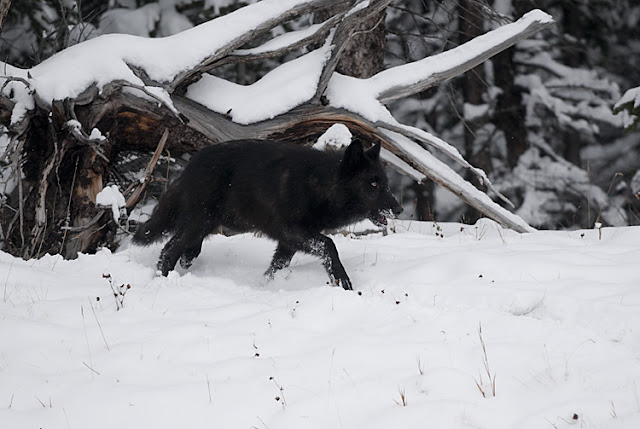 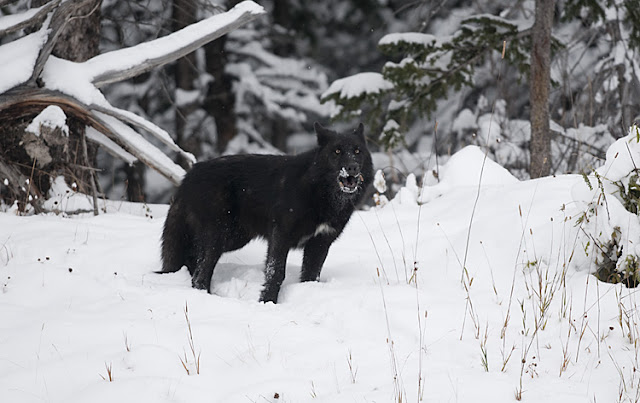 While we were both looking at the images on the back of the camera in a state of complete disbelief at what we had just seen, another mostly black with some obvious silver wolf appeared in the exactly the same place as the black one had and followed the same path across the hill, again we quickly grabbed a series of photographs of it before it disappeared into the trees. 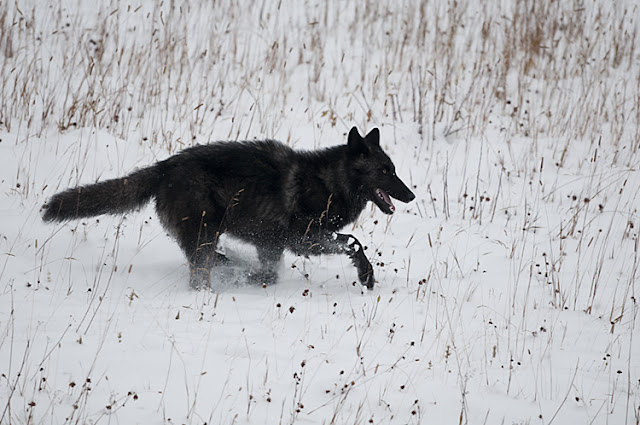 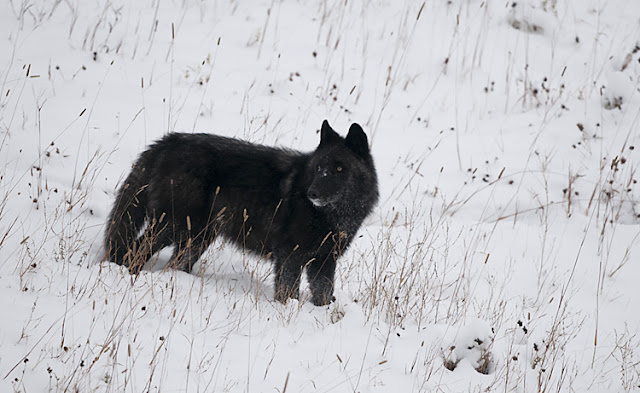 We stayed in the same spot, which had a good view of a nearby hill where a ram Bighorn Sheep and a group of Elk were looking nervous, not far from where the original four wolves had gone. It was soon obvious why they looked nervous as two black wolves trotted distantly along the hillside, though seemed more intent on finding their comrades than hunting. As we were watching these, me having decided the open sunroof, despite the falling snow, was the best vantage point, I noticed movement out of the corner of my eye and looked round as a grey wolf emerged from the trees where the previous two had and followed the same path, clearly scenting and stopping to howl to relocate the others before again heading into the trees. 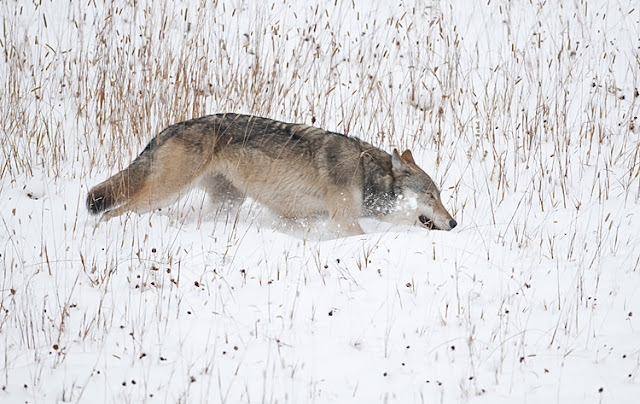 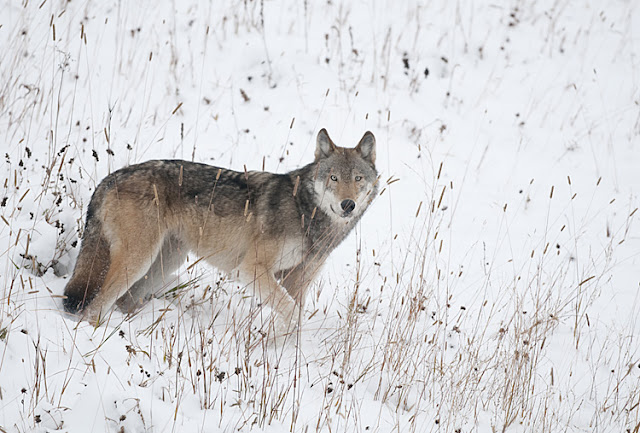 With the light beginning to fail, the sound of howling echoed around the hills as the two black wolves were joined by a third that crossed the road behind us, scaring the life out of a buck White-tailed Deer that exploded out of a small copse, though thankfully for it, but maybe not us photographers, the wolves didn't pursue it. 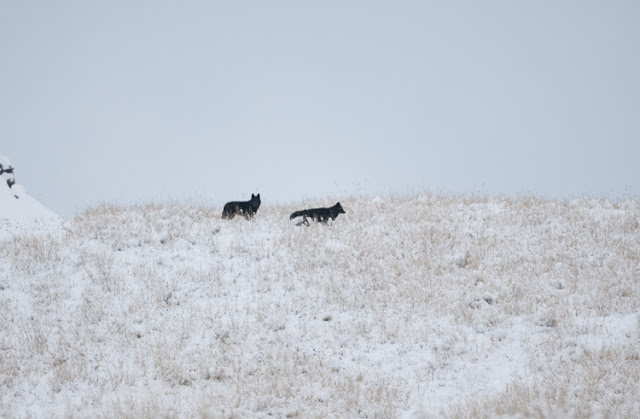 From the locations and timings of the sightings, we estimated there were 6 wolves in total, 5 black (which apparently predominate in that part of Alberta) and the single grey. In total, we were probably in that spot for two hours of the most exciting and exhilarating wildlife photography we have ever experienced of one of the most charismatic species imaginable, and one that will last long in the memory.
Posted by Neil Calbrade Photography at 21:55 1 comment:

Although the reason for coming to Bella Coola was to photograph Bears, the birdlife, although sparse, can be equally spectacular.  This morning we left our accommodation and headed towards the bear viewing platform, pausing briefly to pay our respects to the Moose and the mum and cubs Grizzlies that were by the road.  As we neared the turnoff to the platform, I saw something drop into the grass by the road.  Thankfully with no other traffic around us, I slowed right down until up from the grass flew an owl, and thankfully perched in a tree right by the road.  Frantically trying to open the sunroof to poke my lens out of, pulling my groin in the process, there completely unbothered by us was a stunning Barred Owl. 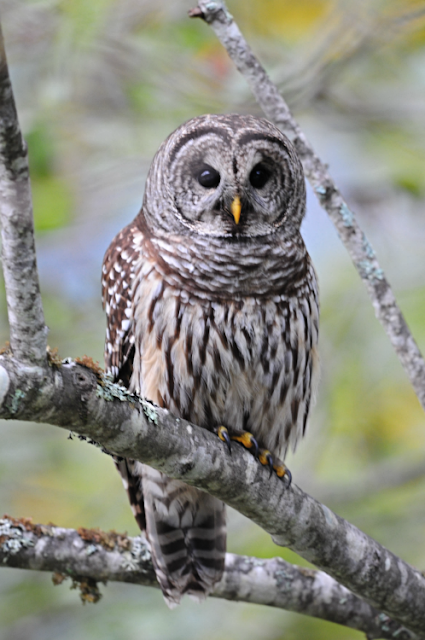 Having spent an fruitless hour on the platform with nothing but a singing American Dipper and a family of Downy Woodpeckers to pass the time, we started the long drive back to Williams Lake.  Just after the crest of 'The Hill', I slammed my brakes on, when sat on top of a dead tree by the road was a Hawk Owl.  It flew across the road and perched on another tree though not particularly close to the road where we could watch it for several minutes. 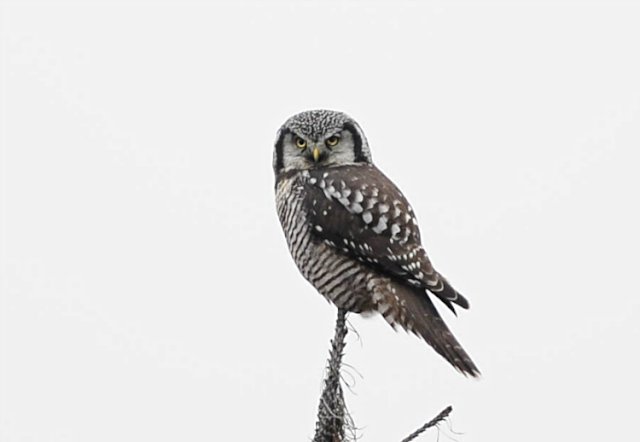 Posted by Neil Calbrade Photography at 05:05 No comments: