In leaps and bounds

With Wednesday being a write off with the glorious weather of the previous day instead being grey, cold and windy, wildlife watching was hard going. A look off Fort George, which lies on the opposite side of the bay to Chanonry Point in the hope the dolphins may be closer in off there drew a blank, though seabirds were more numerous in the conditions, including a group of Arctic Skuas terrorising terns for their food which I always enjoy watching! The Findhorn Valley wasn't any more productive, with no sign of any Golden Eagles, just a few 'Tourist Eagles', a.k.a. Buzzards seen. A walk through the woods at Boat of Garten in the hope of Red Squirrels proved fruitless, though several Crested Tits called loudly high in the pines and a Roe Deer looked unsure of us but stood his ground. 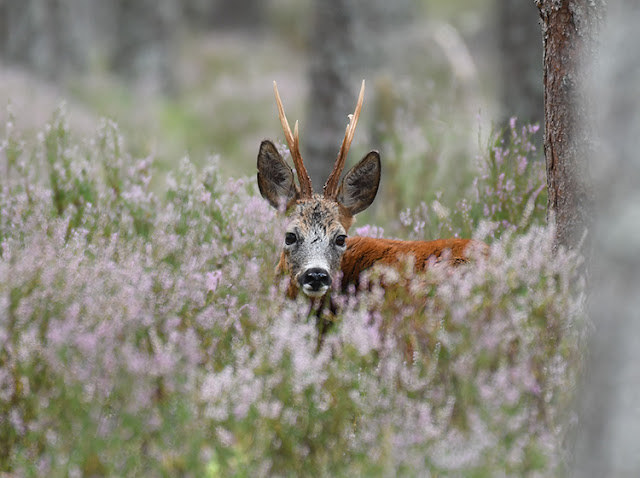 Thursday we again woke to beautiful sunny weather, and so headed back to Nairn Harbour where at least 3 Basking Sharks were still feeding offshore, but more distantly than on Tuesday. A group of Bottlenose Dolphins loitered in Nairn Bay, so we went just down the coast to Whiteness to try to see them closer, but they were still distant, only a confiding group of juvenile Sanderling on the beach made the visit worthwhile. 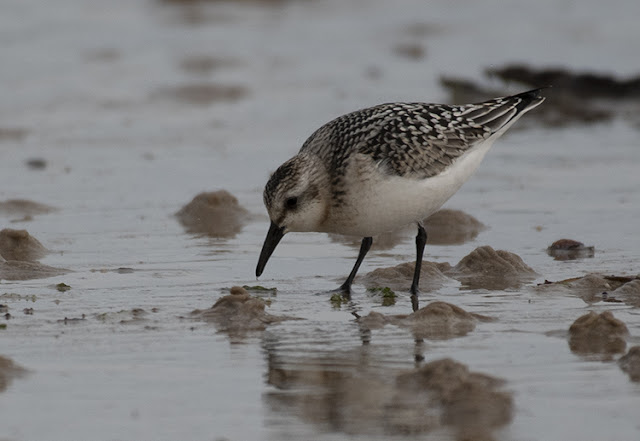 With such nice weather, we carried on to Chanonry Point in the hope of closer views of the dolphins. Our hopes were realised immediately as we arrived with a group of Bottlenose Dolphins were bounding through the bay just offshore, occasionally jumping clear of the water much to the delight of the gathered watchers on the beach. 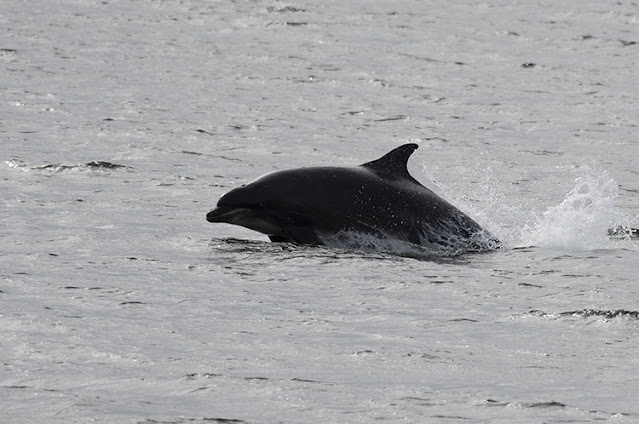 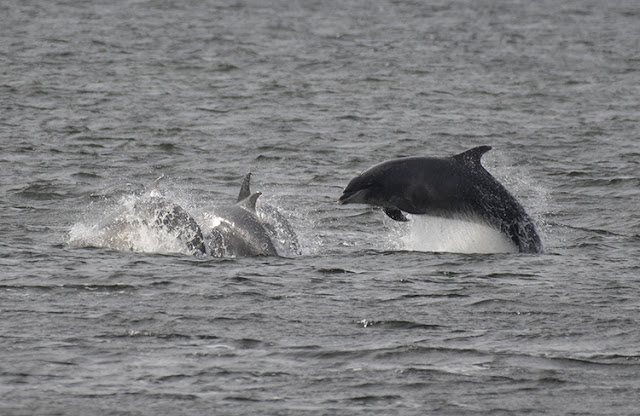 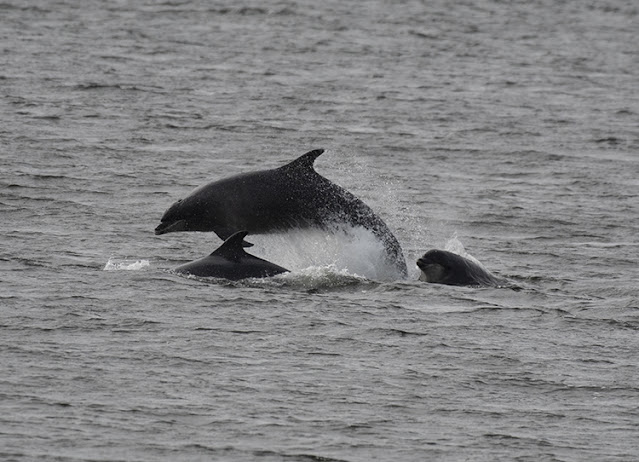 After while the dolphins moved further out and many of the dolphin watchers left, and as we sat and waited in the hope of the dolphins returning, a group of 6 Ringed Plover flew in, with a slightly larger wader, and landed on the beach in front of us. It was a surprise when I lifted my bins and realised the larger wader was a very smart-looking juvenile Curlew Sandpiper, not a bird I was expecting to see here! 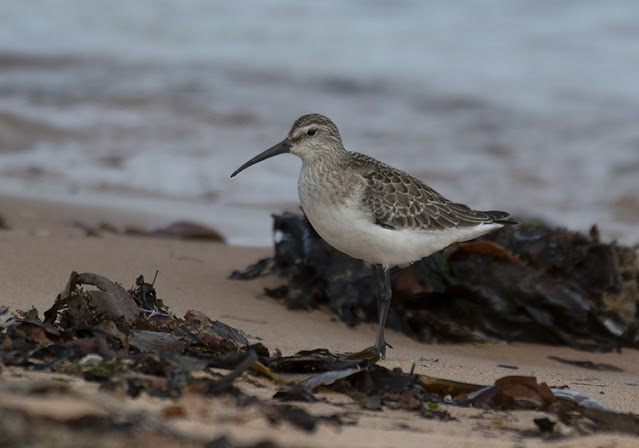 With the dolphins not returning, we headed to Glen Affric. At the head of the glen is a short steep walk up to a viewpoint, which gives a superb view of the surrounding hills, excellent for looking for raptors. Initially only a few Buzzards and a Kestrel were on show, and eventually a Golden Eagle appeared, soaring majestically, and was soon joined by a second bird. Initially both eagles were distant, and once one landed, the original bird, a first year bird judging by the white on the tail and wings appeared closer and gave superb 'scope views. 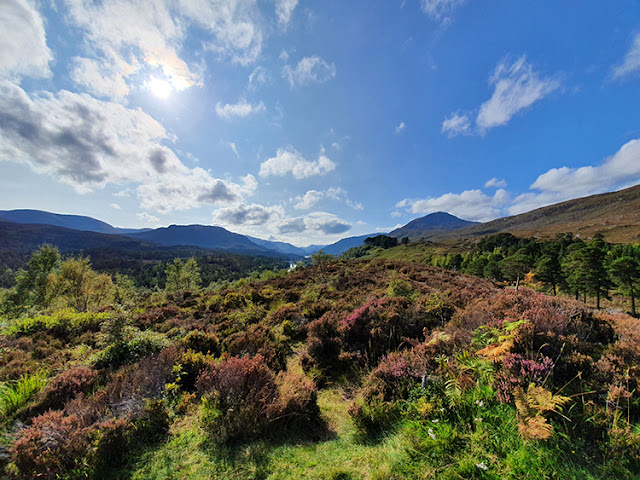 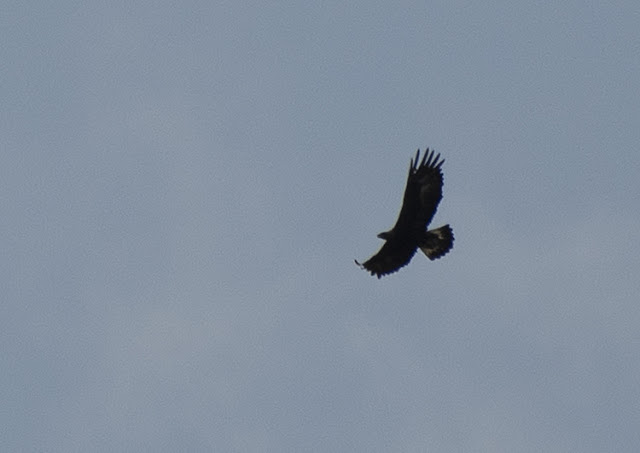 With the hope of photographing Red Squirrels, we went around the other side of the glen to Plodda where they are reportedly abundant. Typically, none were to be seen, but better was a Crossbill, which looked good for Scottish going off the bill shape which perched on top of pines around the car park, calling loudly, but frustratingly I wasn't able to get a photo.

Friday was another gorgeous morning, with the thick fog soon burning off as we headed toward Speyside. With Toni wanting another go at photographing dolphins, I took myself off up Cairngorm to look for Ptarmigan. The warm weather made for a tough walk up Coire an t-Sneachda where I have had success in the past, and despite a 5 hour walk with stunning views back over Loch Morlich, I couldn't find a Ptarmigan anywhere! 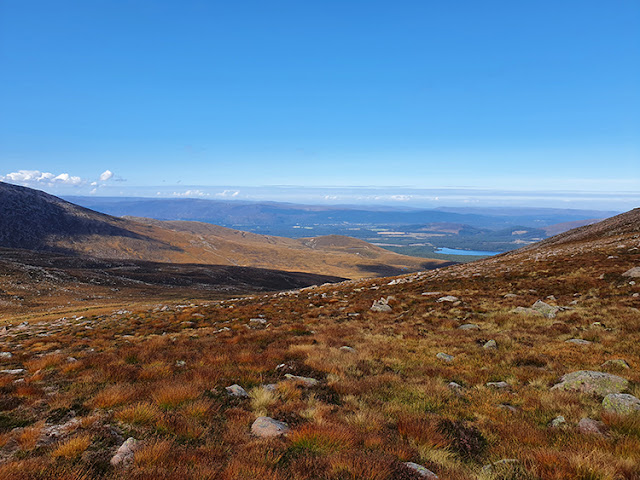 Saturday was our final day and after a quick visit to Lochindorb, which is my favourite loch, to do a WeBS Count, which produced an unexpected Slavonian Grebe with as small group of Goldeneye, lingering fog around Speyside brought our week-long trip to a conclusion, just the 10 hour drive home to look forward to...

Posted by Neil Calbrade Photography at 21:15 No comments:

After a couple of wet and windy days on the west coast of Scotland, including the arduous drive down Ardnamurchan Point to be greeted by a bank of fog, only the resident American Black Duck at Strontian and a couple of sparring White-tailed Eagles to slightly raise the excitement levels, we headed across to Speyside. 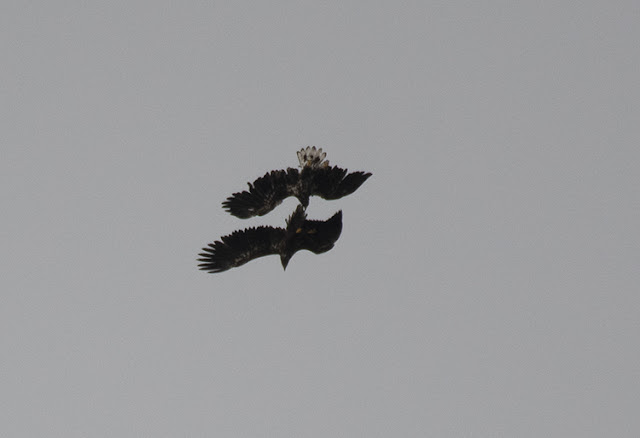 Arriving in our accommodation late afternoon, a wander around the forest produced a superb but all too brief juvenile Goshawk, darting across a clearing, perching briefly before disappearing into the trees.

This morning we awoke to the sound of rain, and following a leisurely breakfast, we took the chance that the Met Office forecast for Inverness was correct and headed to the Moray Firth in search of some dolphins. Amazingly the forecast was correct as the sun broke through the clouds and there wasn't a breath of wind, something I can't remember ever experiencing at usually one of the coldest spots in Scotland - Chanonry Point. Typically the small car park here was already nearly full when we arrived and the only dolphins were very distant, and they stayed that way the whole 2 hours were were there.

A chance text message from our AirBnB owner told us of a couple of Basking Sharks on Nairn Harbour, something we had hoped to see on the west coast, but the weather was far from suitable. Here though, the sea was like a mill pond, and immediately on arrival at the harbour, we could see the distinctive fin and tail tips of a Basking Shark offshore. A scan around revealed at least four other Basking Sharks, though most quite distant, and became more distant as the tide receded. 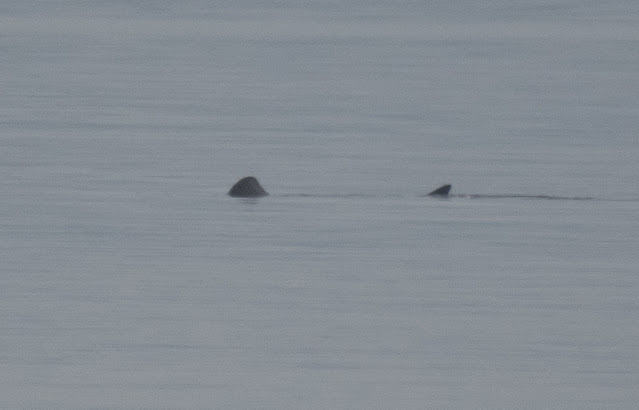 With the glorious weather, we had to drag ourselves away for a prior appointment in Badger Hide. We met our host, Allan, in Boat of Garten and followed him in his car to the parking spot, and after a short walk arrived at the hide. The hide is run by the Boat of Garten Wildlife Group who do other conservation initiatives in the village. Less than half an hour after arriving and the peanuts being put out, the Badger arrived, as early as 7pm while it was still light. This was quickly followed by a couple more and eventually had 5 at one time, including a cub. The badgers fed completely unconcerned just feet from the hide, and were completely unconcerned by camera noises or even our host talking about some conservation issues. 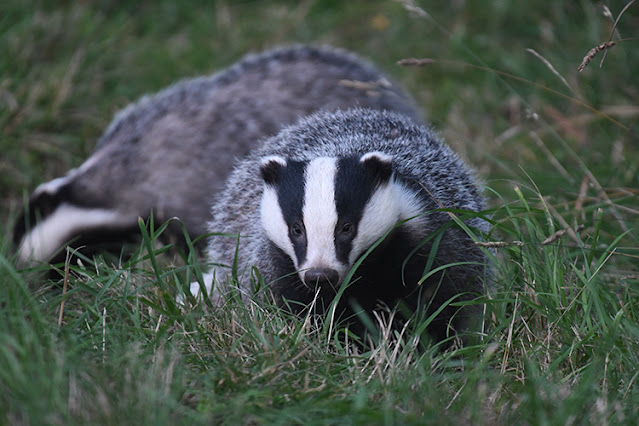 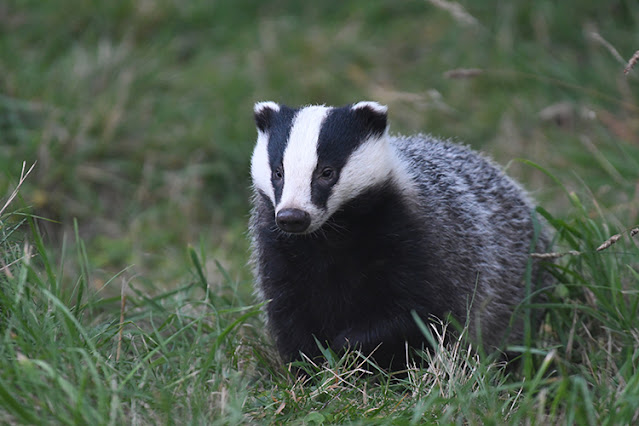 Posted by Neil Calbrade Photography at 22:22 No comments: 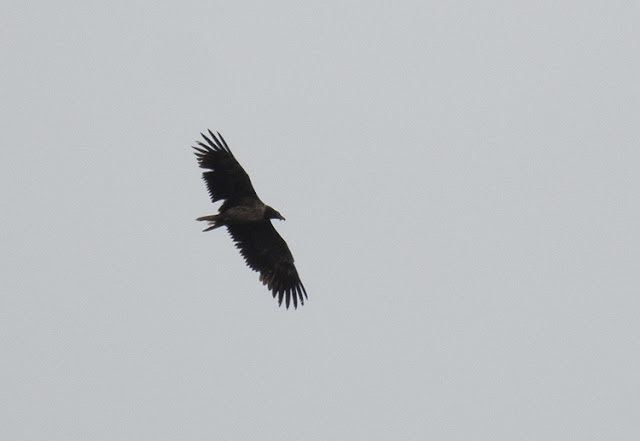 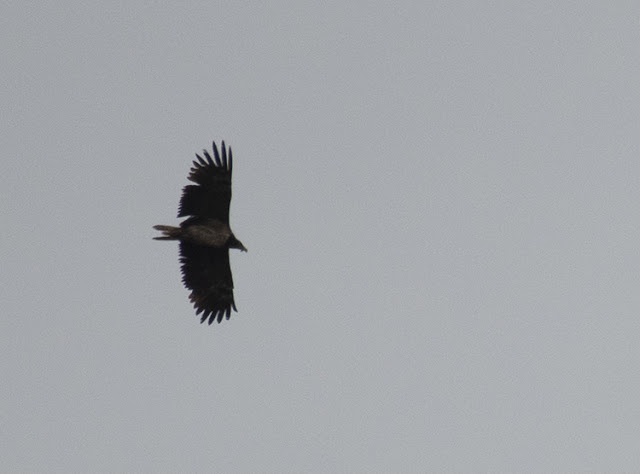 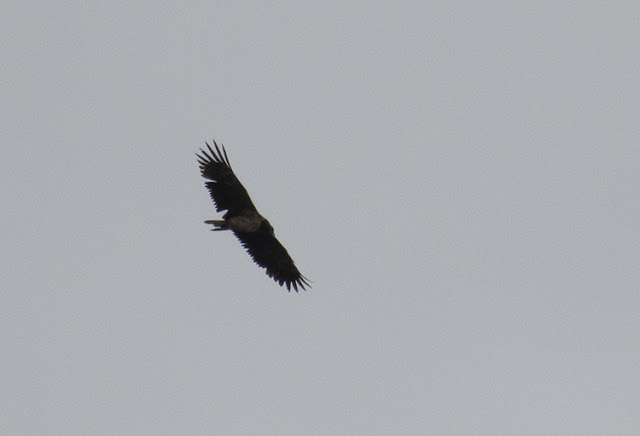 Posted by Neil Calbrade Photography at 19:28 No comments: