All you can eat buffet

Now that the ex-tropical Cyclone Oswald has passed, thing are returning back to normal, though we still can't continue our planned journey north until the floodwaters recede with many of the roads out of here still blocked, so we are stuck in Hervey Bay until we can get out.  Thankfully, there is still a lot to see and do around here and temperatures are now back to bordering on unbearable, meaning for much of the day time is best spent in the shade by the pool!  We headed out first thing this morning to make the most of a glorious morning before it got too hot and finally had excellent views of some Eastern Grey Kangaroos.  We came across a couple of mothers with young, which weren't too bothered by us snapping away, only when a dog appeared did they hop off. 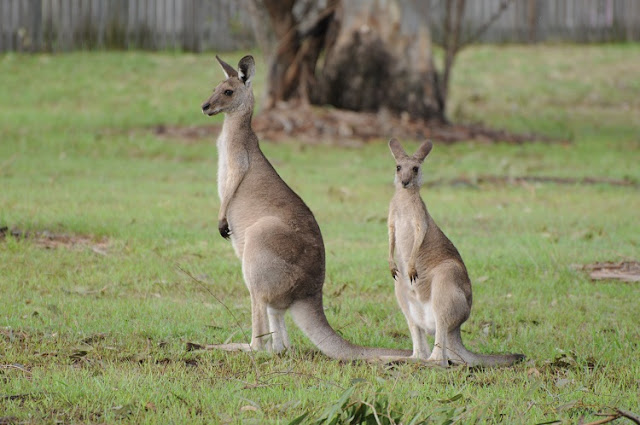 On the way back we stopped along the esplanade where many Blue-faced Honeyeaters, Little Friarbirds, Noisy Miners and a Pied Butcherbird were taking advantage of an ant nest that had become exposed, with clouds of flying ants being gobbled up.  Photographing these birds flycatching was certainly a challenge, with birds flying and jinking very quickly though the autofocus did remarkably well to keep up with them. In the end I was quite happy with a few images, even capturing the ant fractions of a second before the honeyeater did! 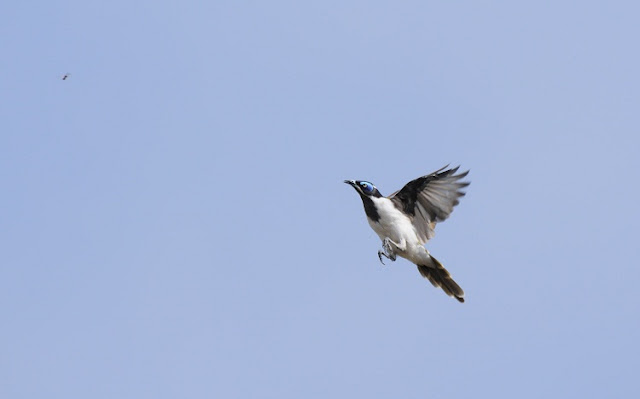 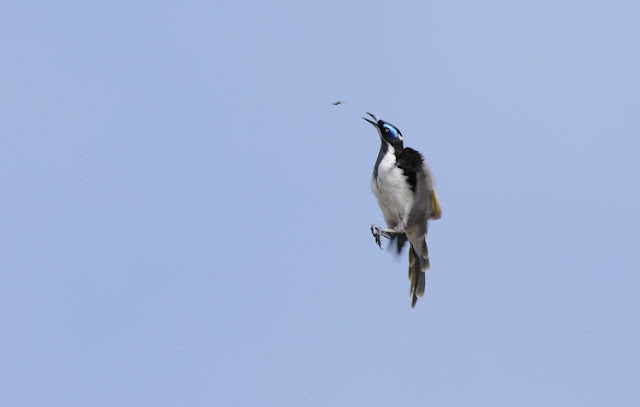 Posted by Neil Calbrade Photography at 01:17 No comments:

Gone with the wind

I have been told I am a jinx with the weather when it comes to camping, but when I decided to come to Australia, which is currently suffering its worst drought for over 100 years, I didn't really expect to get caught up in a cyclone!  All yesterday and last night the wind and rain were relentless, thankfully one of Toni's friends who lives in Hervey Bay took pity on us and gave us a solid roof over our heads.  First thing this morning, the wind and rain were still persisting, but nothing like yesterday.


Thankfully, by mid morning the rain had died down and a quick drive round town along the seafront showed that many birds had been caught up in the winds, with at least 3 Lesser Frigatebirds over the town and several Bridled Tern and Common Noddy flying along the beach and over the houses! 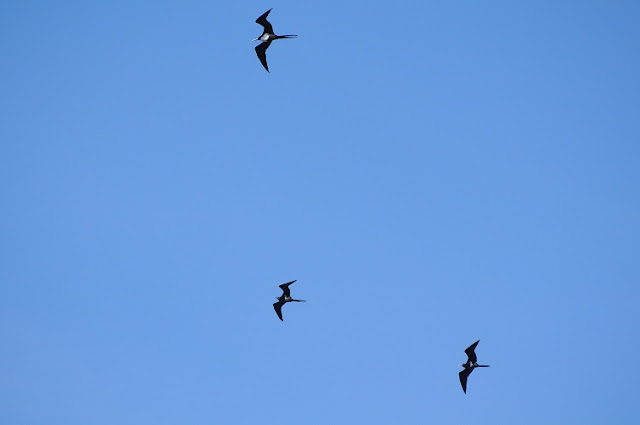 The cyclone has now moved south, but as many roads north of us are still blocked, we may be here for another day or two, but there should still be plenty to see...
Posted by Neil Calbrade Photography at 10:40 No comments:

On the road again

Following a couple of days around Sydney and the Blue Mountains, we have begun the long trek north to Cairns.  A lack of internet has meant I have not been able to update this blog as often as I would like, but having reached Byron Bay I am at last able to.
First stop was a place called "The Entrance", though the entrance to what I am not sure.  Here amongst other birds was my main target bird for the trip, Superb Fairy-wren.  Flicking through books, these guys look amazing, and believe me, in real life are just as stunning, the electric blue markings on the head glints in the sun, and although the photos look quite good, I am hoping for better in the coming days. 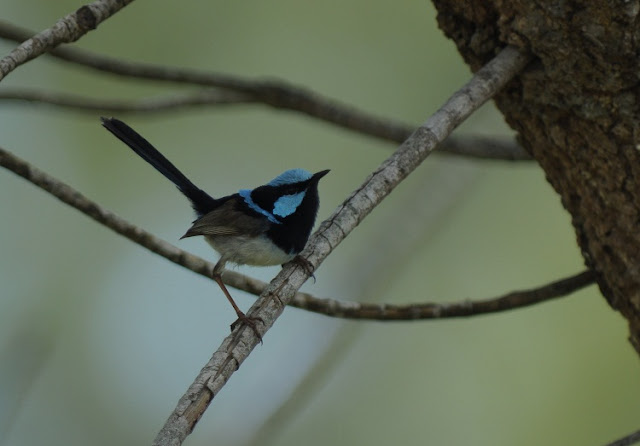 Later the same day after a long drive, we found a campsite in the Myall Lake National Park, where on arrival, sat on a post right next to the car was a Tawny Frogmouth.  Again, I was hoping to see one of these bizarre birds, but being strictly nocturnal, I didn't hold out much hope, so to see one so close was amazing, but photographing it in the pitch black was more luck than judgement, I only managed a single shot using the flash on the camera and was amazed how sharp it was given I had to manually focus the camera because the autofocus couldn't cope. 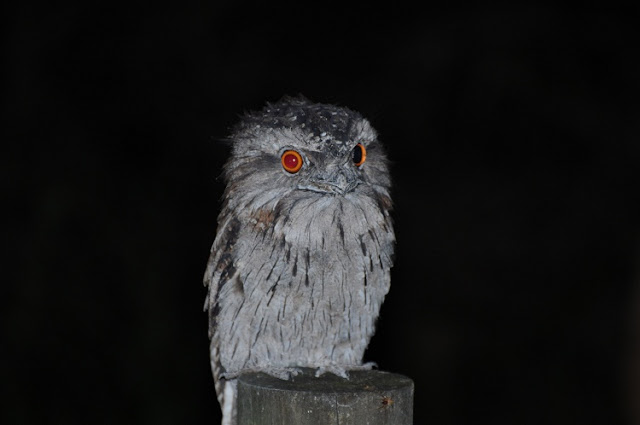 As we sat around that evening cooking our tea, a Dingo even paid us a visit looking for leftovers but we didn't manage a shot of that, or next morning when it was still wandering around the campsite.  During the night, we even had Dingos howling around the campsite, certainly not something I expected to hear.

Yesterday evening we pent at Bellingen, where the spectacle of thousands of Grey-headed Flying Fox bats leaving their daytime roost to feed and drink is truly amazing.  Unfortunately they waited until the light was too poor to get any photos, but managed some short video footage.

Today the weather was more akin to the Britain, being dull and wet, although considerably warmer!  With our Wicked camper van seemingly falling apart around us and doubting it will make it all the way to Cairns, we are hoping to get a replacement in the morning before continuing northwards......
Posted by Neil Calbrade Photography at 10:18 No comments:

Head in the clouds

Woke up to something I wasn't quite expecting in Katoomba this morning - rain and low cloud!  I was warned that no matter what the weather was like on the coast, up in the Blue Mountains it could be very different, and sure enough it certainly was today!  Despite this and having slept off the jetlag, we were out before breakfast on the short walk to Echo Point, and even though the rocks that make up the spectacular (or so I'm told, I'll let you know when I've seen them) Three Sisters stand over 900m and only a couple of hundred metres from the viewpoint, they were still invisible.  Spending most of the day there, the weather never improved, but despite the poor visibility, there was still a lot of birds around, including a couple of stunning Eastern Spinebills, Golden Whistler, Yellow-tailed Black Cockatoo and Eastern Yellow Robin, both Lewin's and New Holland Honeyeater and Red-browed Firetails, though the conditions did make identification of some birds a tad tricky.  The camera stayed in the bag for the majority of the day, only a confiding juvenile Eastern Spinebill, sadly nowhere near as stunning as an adult, was in any way photogenic. 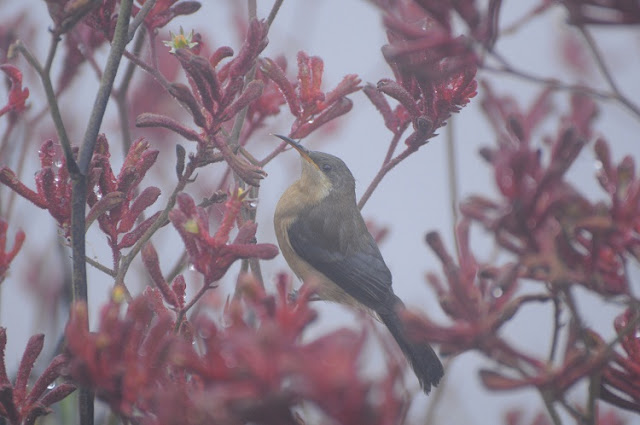 Posted by Neil Calbrade Photography at 20:48 No comments:

Sunning it in Sydney

"Well thank God that's over" was the first thought that came into my head as we finally touched down in Sydney after the ridiculously long flight to Australia via Beijing, made all the longer by me not sleeping at all well on the plane. Once through the airport we headed into Sydney and following a slight sleep-deprived mishap with leaving my credit card in a railway ticket machine, which thankfully had been handed in to the office, we finally headed to Circular Quay to meet up with a mate of mine and a quick bite to eat.  Here we saw our first birds of the trip, with Australian White Ibis, Silver Gulls and Noisy Miners pestering people for scraps of food and a posing Australian Darter in the harbour. 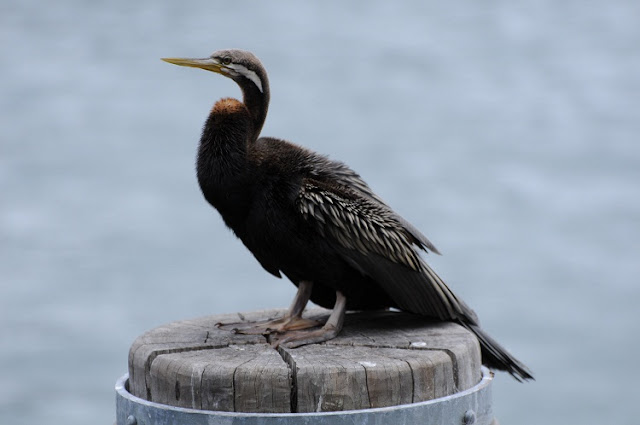 After lunch, we went to the Botanical Gardens next to the Opera House for some gentle introductory birding.  Thankfully the temperature was bearable, having left England in -6 degrees, I was a little concerned when we heard it was 45 degrees in Sydney the day before, and being overcast, the light wan't too harsh either.
When people have told me the birds in Australia are tame, I don't think I really understood just how tame, with stunning Rainbow Lorikeets, Noisy Miners, Australian White Ibis, Australian Wood Duck, Pacific Black Duck, Dusky Moorhen, Masked Lapwing and bird of the day by far, a cracking Buff-banded Rail all wandering round our feet. 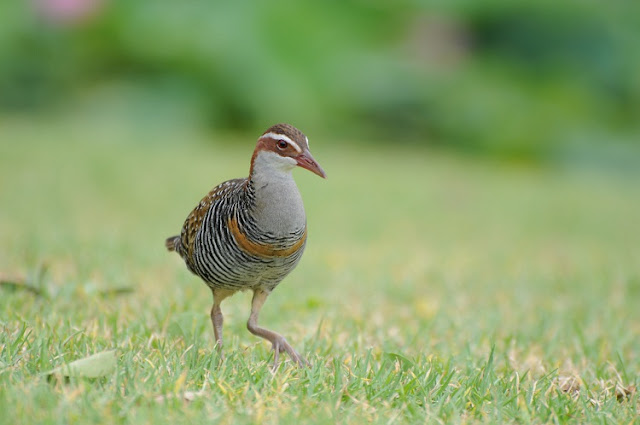 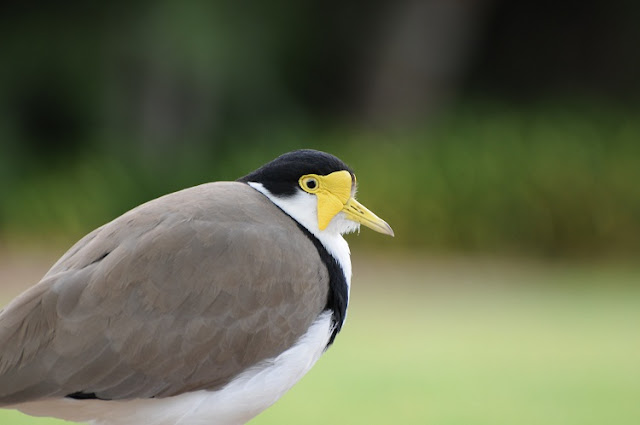 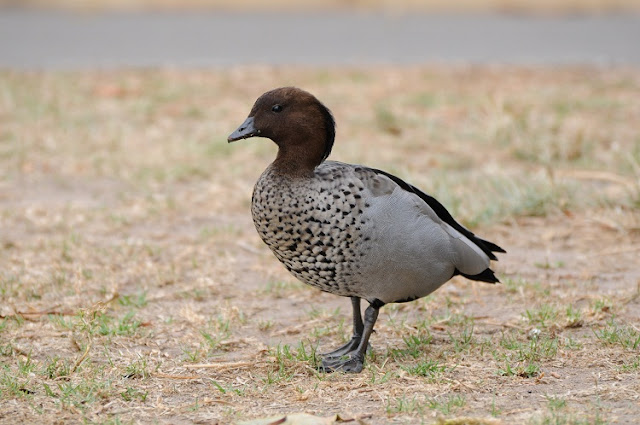 Lying on your belly in frozen leaf litter on your lunch break may not seem like most people's idea of a good time, but sometimes, needs must.  This lunchtime I was back with the local Black-bellied Dipper on a gorgeous, crisp winter's day but typically when I got there the Dipper wasn't showing at very well at all.  Thankfully after a while it moved closer and further upstream to where I have seen it before so fully expecting it to use one of its favourite perches, I moved on ahead of it and lay in wait.  After ten cold minutes, the Dipper moved closer until finally perching on just the perch I was hoping for, but by then the light had moved round but still allowed stunning photographic views only a matter of metres away. 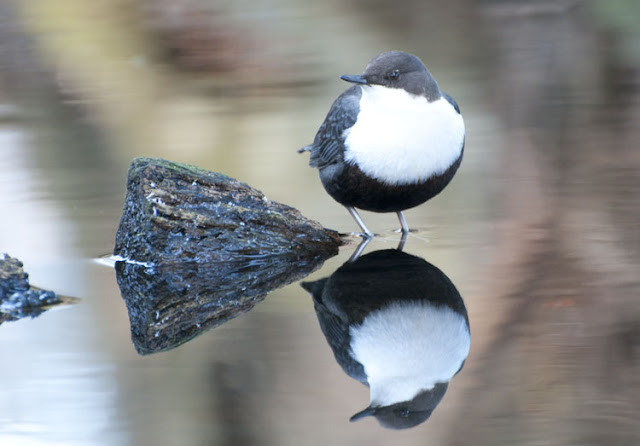 Just another day in Thetford

Walking through Thetford in the snow with over a thousand pounds worth of camera gear in your rucksack can be a bit unnerving, especially on some of the more icy roads, but the local Otters certainly make it worthwhile.  I can't think of anywhere in the UK where Otters are as easy to see or as confiding as in Thetford, many mornings they can be seen along the River Ouse happily fishing away just a few yards from people making their way to work and dog walkers.  This morning, one Otter was doing just that along Spring Walk, at one point popping up less than 5 metres away before merrily carrying on, and just for good measure it was even joined by a Kingfisher that was taking advantage of the small fish it was disturbing. 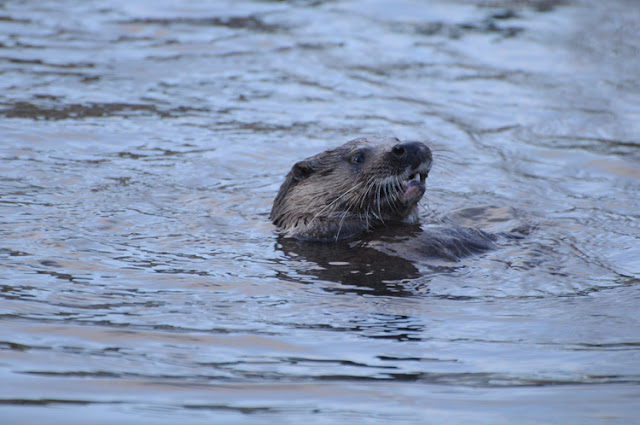 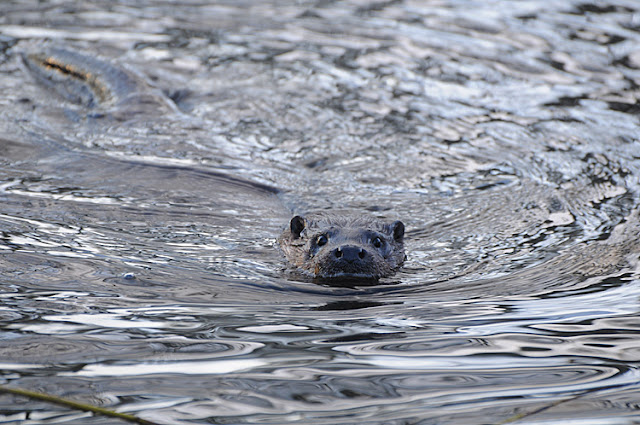 Just to make the day complete, lunchtime saw me back with the local Black-bellied Dipper, and even though the light was again poor whilst I was there, it showed incredibly well, this is uncropped with a 300mm lens from 5m away! 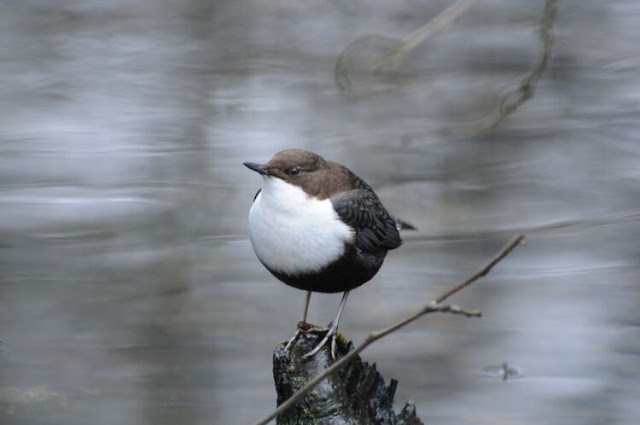 Having a rare bird literally within a stone's throw of where you work certainly does have its advantages as you can pick and choose when you want to go and have a look at it, preferably without too many other people around.  Although not the brightest of mornings, as I was up and ready a bit earlier than most work days, I had a look at the local Black-bellied Dipper this morning and it showed really well, but the stream it is now favouring is very shaded and even with the ISO cranked right up to 1600, I could only manage 1/40 of a second shutter speeds.  One of these days I will photograph it in half decent light, but until then I'll have to make do with dull and overcast. 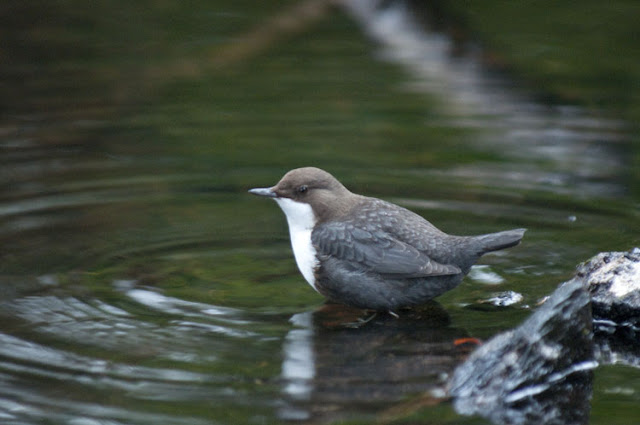 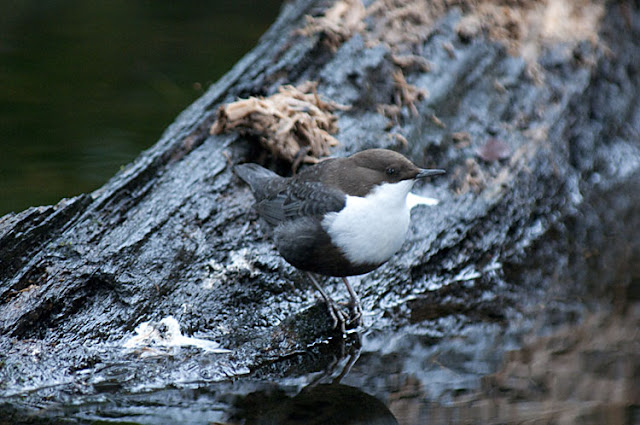 Again, as it was so confiding and quite stationary, it seemed a shame not to take a quick video too....


Posted by Neil Calbrade Photography at 11:06 No comments:

Waxwings really are the photographer's friend - they are remarkably tame, attractive and love to pose!  There have only been small numbers in Thetford this winter and then have been quite difficult to pin down, well for me but last few days a group of about 20 have lingered and showed extremely well. I've never seen them eating rosehips before and having seen them struggle to swallow them whole I can see why, they are clearly  a last resort once the proper berries run out.  Unfortunately, but the time the light had improved early afternoon having been dull and grey all morning, the sun was low and the birds were in the shadow of trees and buildings on the industrial estate where they were, and so the light on the birds was poor. Still, it seemed a shame not to take a few pictures and hopefully they will hang around until we get better light for photography. 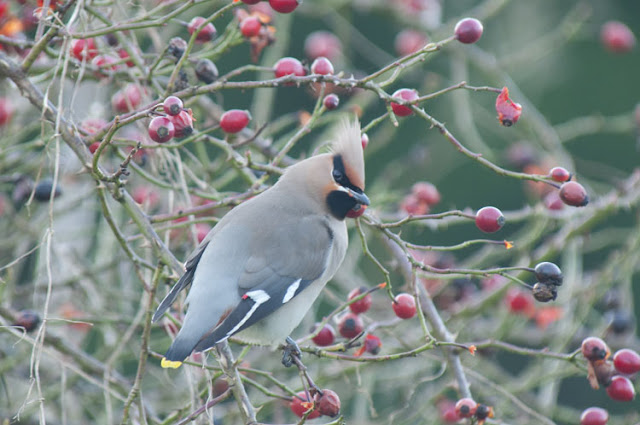 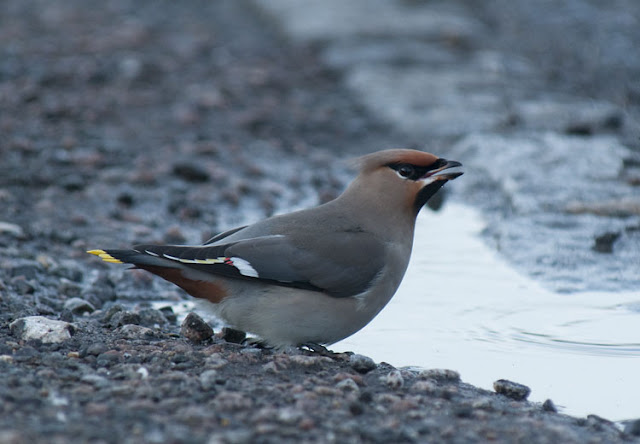 Posted by Neil Calbrade Photography at 20:49 No comments: