Leaving the rainforest and heading back down the hill, we started our journey back south to the Blue Mountains where the roadtrip had begun over 3 weeks ago, and ultimately back to Sydney Airport and the long, long flight home. 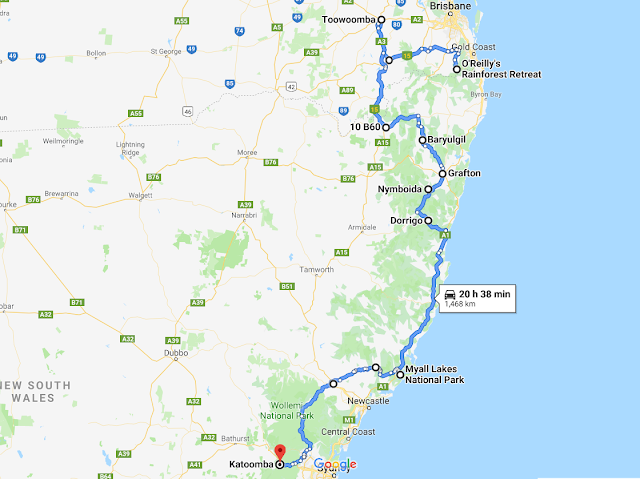 After a slight detour to revisit Toni's daughter in Toowoomba, we set off south down the New England Highway. As we came into the town of Warwick, as we passed a picnic site at Rotary Park, Toni realised she had been there before when she was here earlier in the year and that it was good for parrots, and so we pulled in. She certainly wasn't wrong, as a group of very noisy Musk Lorikeets fed in the trees above our heads and Toni caught a quick glimpse of a Platypus in the nearby river. 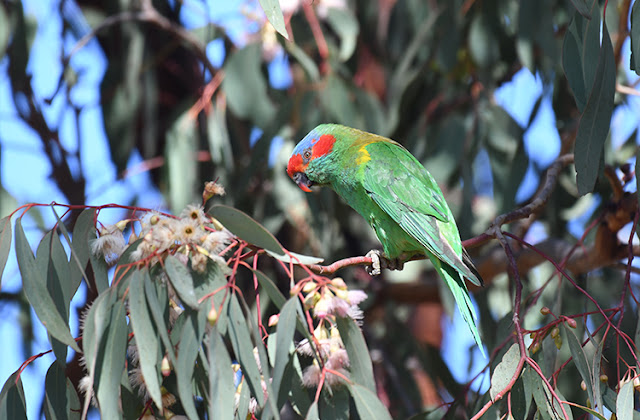 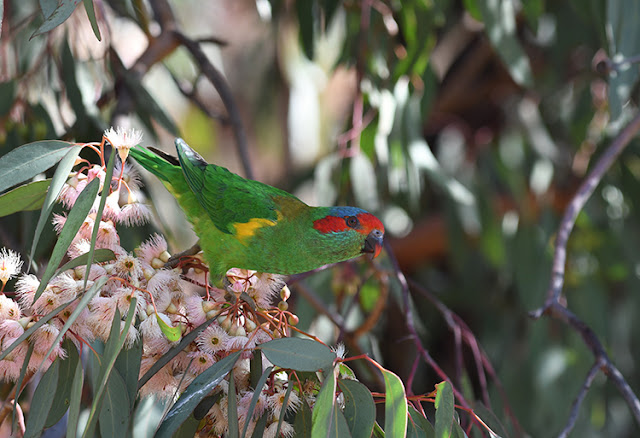 A bird I had hoped to see while we were in the outback was Zebra Finch, a bird I used to keep as pets when I was young. As they are very nomadic, they can be difficult to pin down and we hadn't come across any so far, but eBird again came to the rescue (sorry BirdTrack!!) and recent sightings just outside Warwick gave me hope. The site was by a lake on the back of a housing estate, not a habitat I had expected to be going to look for them, and although the lake had an abundance of Pelicans and a few White-headed Stilts there was no obvious habitat for finches. As we gave up and drove back out of the housing estate, 3 Zebra Finches flew up by the roadside - success! As I got out of the car and walked back to where they were, about 35 finches flew up, I have no idea how we had missed them as we drove in and although very flighty, some sat nicely in some trees along with a pair of Striated Pardalotes. 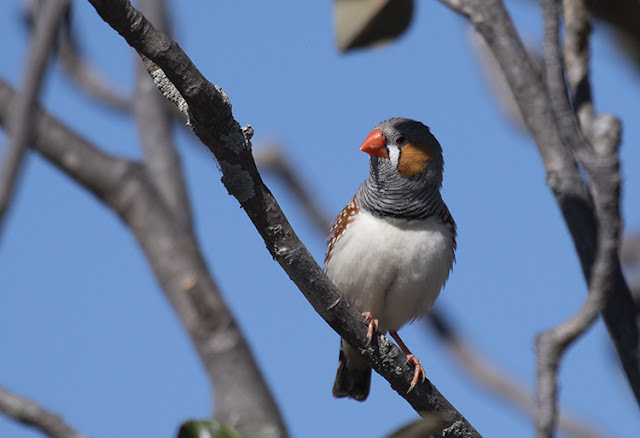 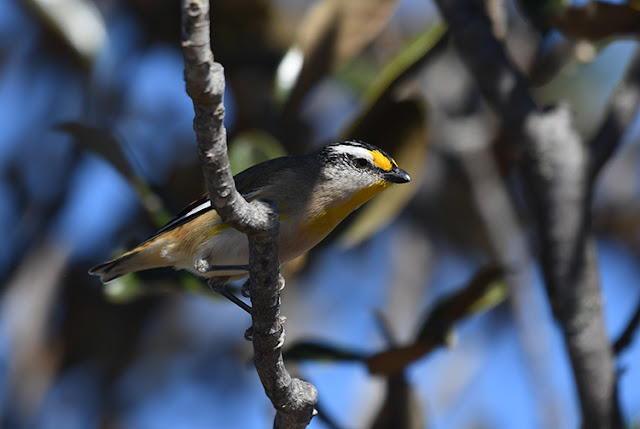 The rest of the day was spent driving down to Bellingen, along some back roads with their abundant kangaroos.

A pleasant night in a Youth Hostel in Bellingen put us in a good location for Dorrigo National Park. I visited Dorrigo when I was last in Australia 6 years ago, and the weather was poor and so we couldn't walk the trails which Toni said are worthwhile. This time the weather was glorious, and the trails were devoid of people and many of the usual rainforest birds like Whipbirds and Catbirds called loudly and a couple of Topknot Pigeons showed surprisingly well, while a female Superb Lyrebird was less showy in the undergrowth. 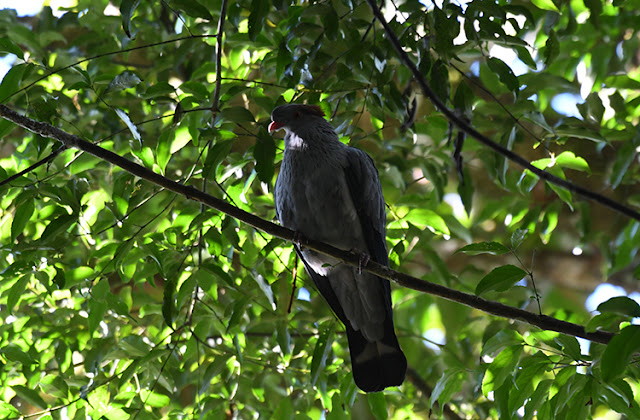 After a mid-morning cream tea, we headed back down the trail to the car, the female Superb Lyrebird had moved across to the opposite side of the path from where I had seen it on the way up. As we watched it along with a young bird, we could hear an array of bird calls including kookaburra and whipbird close by and realised it was actually a male Superb Lyrebird singing a few feet away mimicking them perfectly! After it stopped singing, it moved towards the female and young bird and then met another male and a face off ensued, their extravagant tail feathers fluffed up as they called angrily at each other before one of the males ran off. 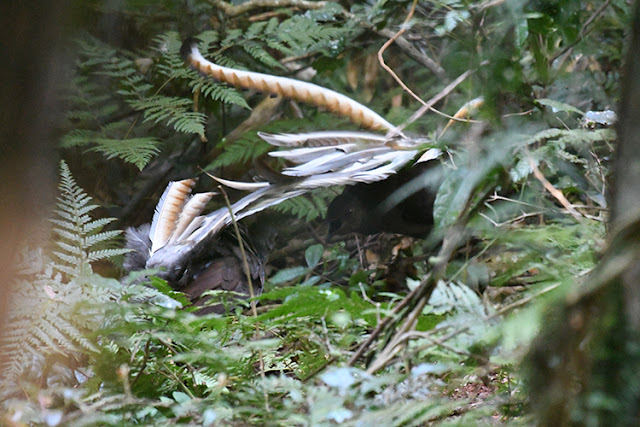 Heading toward the coast for a spot of lunch, we grabbed some fish and chips and went and sat up on the clifftop at Nambucca Heads. From here, we could see at least 6 Humpback Whales offshore, many of them constantly breaching but always very distant. Much better were a pair of White-bellied Sea Eagles that coasted low overhead, hanging on the wind just off the clifftop. 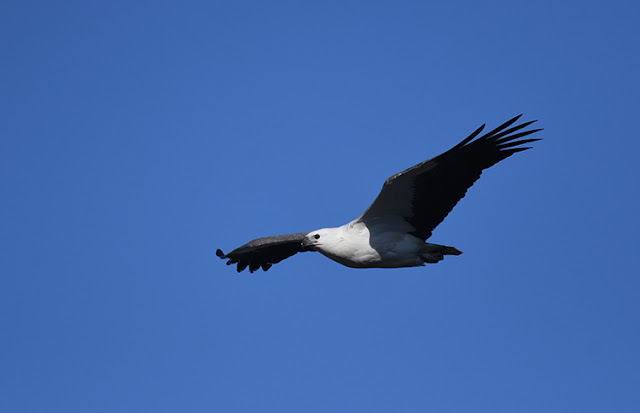 We finished off driving down the coast to Myall Lakes Holiday Park for a couple of nights, arriving after dark and after the reception had closed. Thankfully they had left an envelope with the key and gate code for us and so we were able to get to our accommodation, complete with a couple of tame Grey Kangaroos and a screeching Barn Owl.

After all the driving of the last few weeks, today we had a nice relaxing day around the Myall Lakes area. The hoped for surfing dolphins off the Hole in the Wall car park that Toni had seen earlier in the year failed to materialise and we carried on south to Jimmy's Beach. Twelve years ago when Toni visited Australia for the first time, having failed to find a Dingo in Queensland, she randomly came across one somewhere near Jimmy's Beach and so was intent on finding the same spot. We parked up at a random car park near a creek and as we stood looking across, a Great White Egret suddenly flew up and moments later, a Dingo walked through the mangrove and stood on the opposite side of the creek looking at us!! Typically neither of us had a camera to hand as we hadn't expected to see anything, so we ran back to the car, grabbed the camera gear and walked back and the Dingo was still there watching our antics and after a few minutes walked across, paused again and then disappeared back into the mangrove scrub. 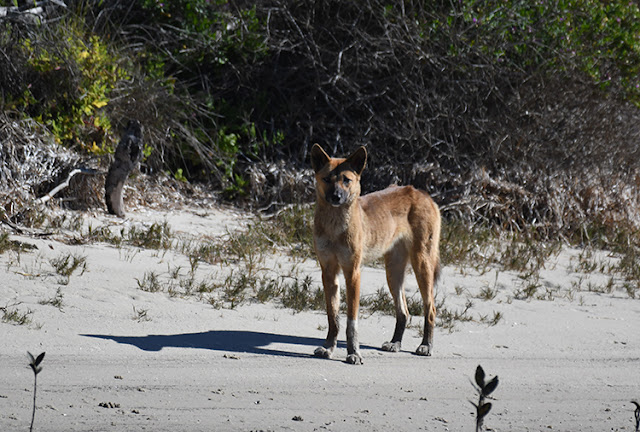 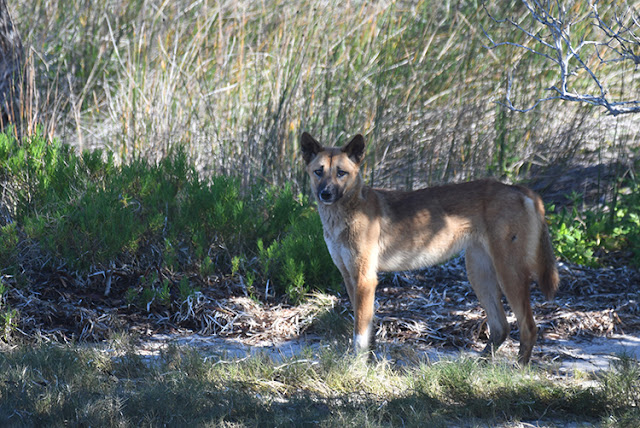 The rest of the afternoon was spent on the Tea Gardens to Port Stephen Ferry, where a couple of Bottlenose Dolphins entertained the passengers as they bow-rided just underneath the boat for several minutes.

It was time to head back to Katoomba, and we left Myall Lakes behind and rather than just whiz down the highway to Sydney, we instead set off west towards the Hunter Valley. We first headed up the Monkerai Valley toward Barrington Tops until the road we thought we could carry on over became impassable, but not before we had seen photogenic Australian Kestrel, Wonga Pigeon and Fan-tailed Cuckoo. 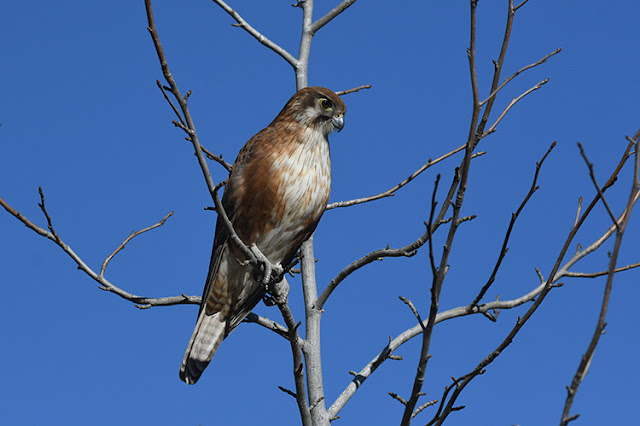 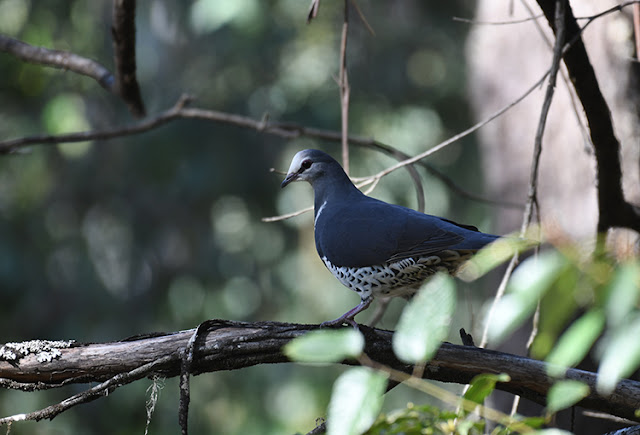 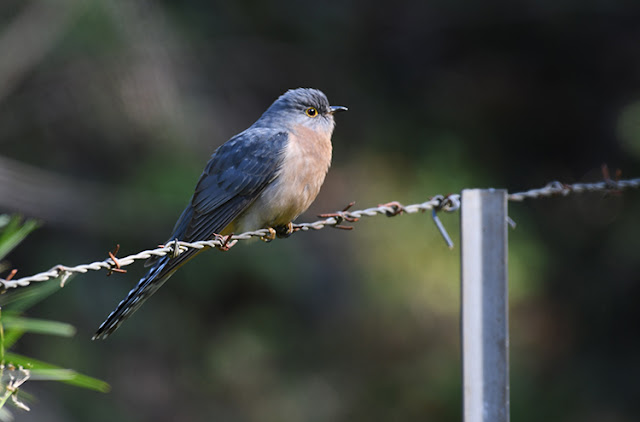 We finally arrived back in Katoomba after dark, following a slight delay as Toni helped round up a horse that had got loose and ran down a road toward us.

A morning walk looking for reporting Gang-Gang Cockatoos at Blackheath drew a blank, but a stunning male Scarlet Robin more than made up for it, a quite fitting looking bird to end the trip. 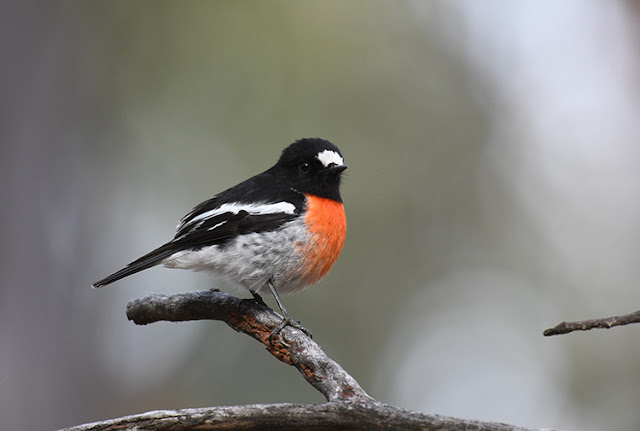 A quick tot up of the miles that Google suggests we covered meant it was just over a 4,500km round trip (probably nearer 5,000km by the time you add the odd diversion and driving around areas), which Toni's Subaru Outback did admirably!! It was interesting to see Malaysia followed by Australia and the outback (well apart from the flies), see the whales and then do some rainforest birding, so a bit of everything really! We managed to amass a species list of about 240 birds and over 26 mammals and had fantastic weather (if rather cold at night) throughout so can't complain one bit. Now just the excruciating flight back to the UK to look forward to tomorrow....
Posted by Neil Calbrade Photography at 09:55