Somiedo National Park, on the border of Asturias and Castile y Leon has become the go-to place to look for Brown Bears, along with the outside chance of Iberian Wolves, in Spain. With four days here we hoped to be successful, and our accommodation in Caunedo, in the heart of the park with views of likely hillsides giving us ample opportunity. Along with the view from the window are several well known viewpoints from where bears can often be seen, especially at this time of the year when they are fattening up on berries ahead of hibernating.

Having spent a morning and evening staring out of the bedroom window at the hillsides north of the village with nothing but a few bellowing Red Deer and a distant Chamois to look at and then a morning visiting one of the known stakeout viewpoints at Puertos de la Farrapona, again with lots of Chamois, but no bears or wolves, we were starting to wonder if we would be lucky.

After a gruelling, and not very exciting walk up to Braῆa de Mumián in the afternoon heat in the feint hope of finding a Wallcreeper, my legs were glad of a short break before heading back out for another bear hunt in the evening. A mile north of Caunedo is the village of Gua, which has a viewpoint behind the chapel near the Mirador de Gua. There is no parking in the village itself, but there are a few convenient pull-ins along the road, which soon fill up with would-be bear watchers. As we arrived, Toni realised in her rush to get moving, she had left her binoculars at the house and so went back, while I walked up the short, sharp hill to the viewpoint, much to my legs’ dislike. As I arrived, a gathering of bearwatchers were at the viewpoint, excitedly looking at the hill to the west, and a quick scan with the binoculars revealed why, there was a Brown Bear sat on the hillside, a few hundred yards away!! As I hadn’t expected to see anything close enough to warrant needing a camera, having lugged it up the Braῆa de Mumián hill, I had decided to leave it in the car! This turned out to be a big mistake and so I rushed back down the hill, getting back to the car just as Toni returned, I grabbed the camera and, fuelled by adrenalin since my legs clearly weren’t enjoying the experience, went back up to the viewpoint but by the time we got back up there the bear had wandered off.

We sat at the viewpoint for a while as the light began to fade, and over the talking I heard faintly what I assumed was just a bellowing Red Deer on the hillside on the opposite side of the river, but it sounded a bit too high pitched. One of the bearwatchers also heard the noise and then uttered the word “Lobo”, which is Spanish for Wolf! I thought he too was being overeager, but then as the voices silenced to listen, we heard it again and it was indeed the unmistakable sound of a wolf howling. A frantic scan of the hillside then ensued and despite the distance, the unmistakable ears of a wolf were visible sticking above a rock right along the crest. After a few minutes, the wolf revealed itself fully, and walked along the ridge, stopping for a brief stretch and a scratch and then stopped and began to howl, which echoed around the valley. The atmosphere at the viewpoint was electric as everyone enjoyed watching the wolf work its way along, stopping occasionally to howl for the rest of its pack, as another wolf nearby began to howl in reply. Even though it was quite a way off and the lens had to be handheld, or rested on my knee, I still managed to get some acceptable photos (well, with a fair amount of cropping in needed) and video, and learned a firm lesson in always take your camera with you. 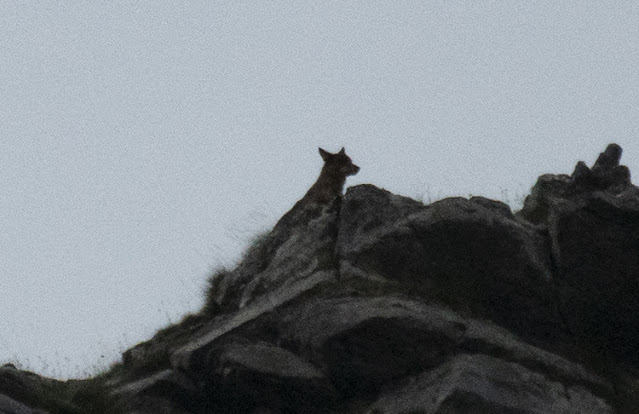 It may not look like much but the first proper view of a wolf is always special! 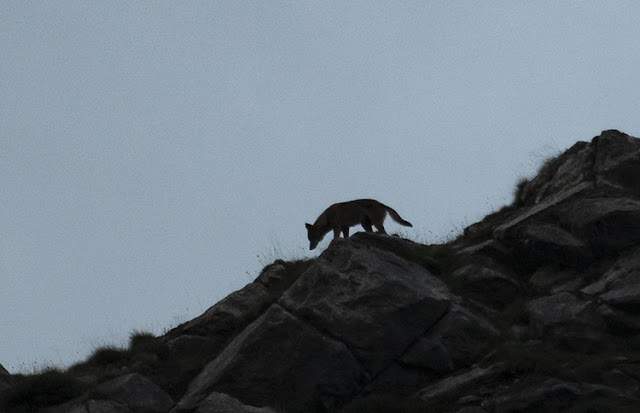 Starting its walk along the crest of the hill 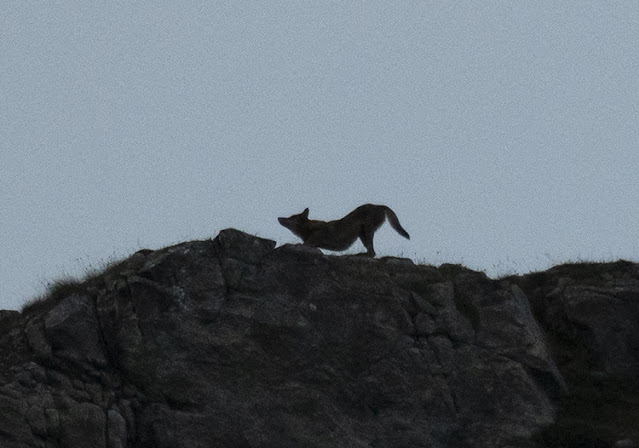 I call this, the "Downward Wolf" pose 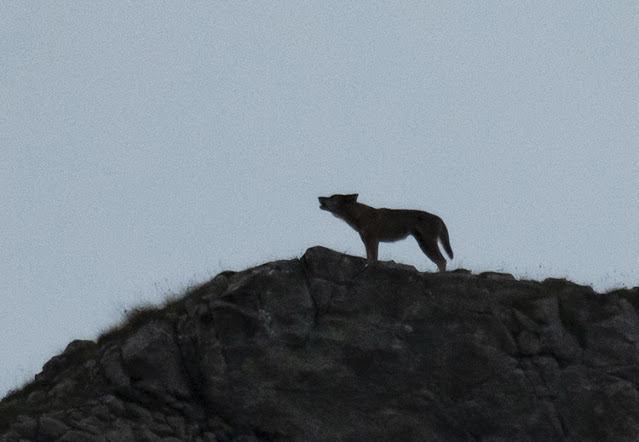 Howling for its pack 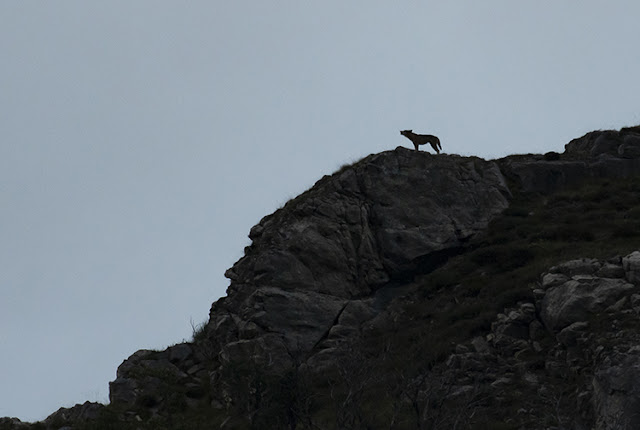 Posted by Neil Calbrade Photography at 15:13